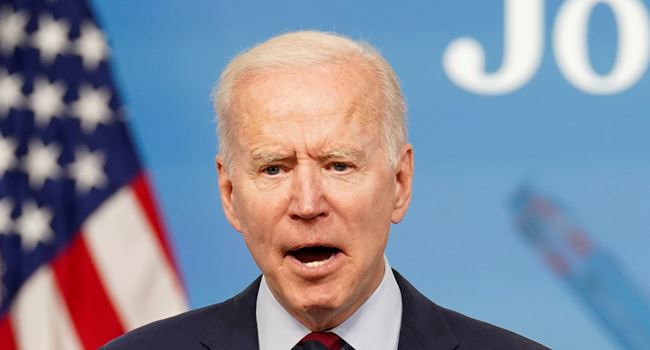 United States President, Joe Biden, has announced a new set of sanctions against Russia, saying the US is deploying additional 7000 troops to Germany to bolster the NATO in the face of “naked aggression” from Russian President Vladimir Putin.

Biden who gave the new outline during a press conference at the White House on Friday morning, said the US would not compromise as “freedom will prevail after Mr Putin chose this war.”

President Biden said the sanctions the US was imposing were aimed at “maximising long-term impact on Russia, while minimising the impact on allies.”

He further made clear that American troops would not fight in Ukraine, but the US would help defend “every inch of NATO territory.”

A US defence official also confirmed that the US will send 7,000 troops to Germany to help reassure NATO allies who are part of a larger contingent that had already been put on alert earlier this year.

The troops would be made up of an armoured brigade combat team and would leave for Germany in the coming days,” the official added.

Biden also confirmed that NATO will convene a summit with the leaders of 20 allied nations and close partners.

“This will affirm our solidarity and map out the next steps we’ll take to further strengthen all aspects of our NATO alliance.

Read also: Death toll in US tornadoes rises as Biden approves state of emergency in Kentucky

“Strong limitations will be imposed on what can be exported from the US to Russia, which will hammer its access to global exports of everything from commercial electronics and computers to semiconductors and aircraft parts.

“This is going to impose a severe cost on the Russian economy, both immediately and over time.

“We have purposefully designed these sanctions to maximise a long-term impact on Russia and to minimise the impact on the United States and our allies.

“I want to be clear, the United States is not doing this alone. For months, we’ve been building a coalition of partners representing well more than half the global economy,” Biden added.

Ukrainian president bans men, aged 18 to 60 from leaving the country