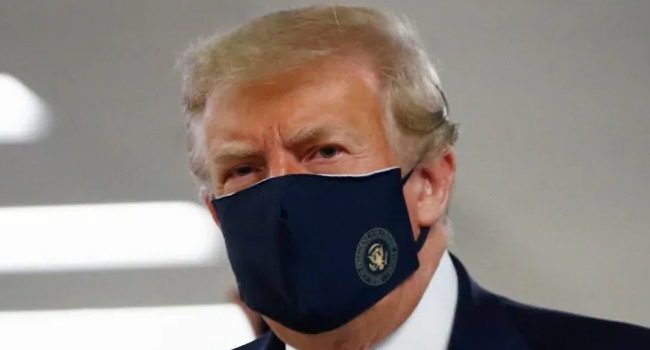 The President of the United States of America, Donald Trump was captured wearing a face mask in public for the first time during a visit to a military hospital on Saturday evening.

Trump was visiting wounded service members and health care providers caring for COVID-19 patients at the Walter Reed National Military Medical Center in suburban Washington when he was spotted wearing a mask.

‘When you’re in a hospital, especially … I think it’s expected to wear a mask,’ the US president said before leaving the White House in a helicopter to visit the Walter Reed national military medical centre.

Moments before he embarked on the trip, Trump told reporters he would “probably” wear a mask and that he had “never been against” them – they just had “a time and a place”.

The development came after Trump previously mocked political rival Joe Biden for wearing one and said he would not put a mask on as protective gear against the dreaded COVID-19 disease.