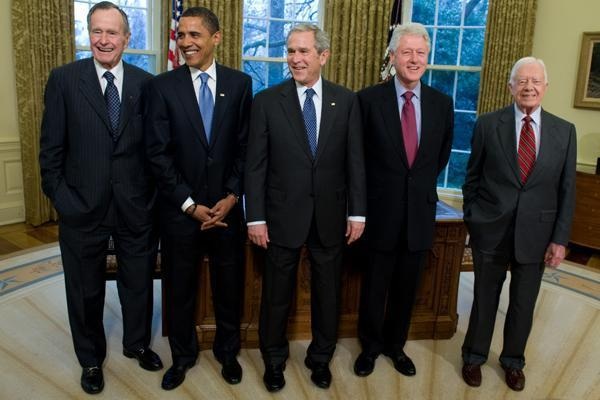 Past presidents of the United States including Bill Clinton, George W. Bush and Barack Obama, along with former first ladies Hillary Clinton, Laura Bush and Michelle Obama, have teamed up to offer aid in a “massive, bipartisan effort to welcome and support Afghan refugees.”

In an unprecedented move, the past US leaders came together to launch a Presidents’ Club on Tuesday, with their wives serving as honorary co-chairs for the group Welcome.US.

The Welcome.US, in a news release, said the President’s Club is aimed at engaging “all Americans to welcome and support refugees, beginning with the individuals and families who fled Afghanistan following the American withdrawal from the nation in recent weeks.”

The Welcome.US group has gathered the former presidents, as well as a bipartisan group of governors, including Maryland Republican Gov. Larry Hogan and Colorado Democratic Gov. Jared Polis, and other leaders, to serve as a central point of contact for public and private efforts to help in the massive effort to help Afghan refugees as they establish lives in the US.

It will connect and coordinate efforts among state and local governments, as well as non-profit organizations, corporations, universities and others, according to the group.

The group will also provide grants to non-profit organizations and will launch a six-figure advertising campaign “to highlight the need for all Americans to join the thousands of people who’ve already stepped up to welcome our new Afghan neighbors as they get settled and build their new lives.”

Also among those efforts, the group said in the news release, are support for housing via Airbnb; meals via Instacart; grants from Walmart, Starbucks and Microsoft; and ad credits from Facebook to promote the organization.

“Thousands of Afghans stood with us on the front lines to push for a safer world, and now they need our help,” the Bushes said in a statement on the organization.

“We are proud to support Welcome. US and the work to help Afghan families get settled and build new lives.

“We stand ready to show our new Afghan neighbors and the rest of the world how a welcoming and generous spirit forms the backbone of what makes our country so great,” the statement added.