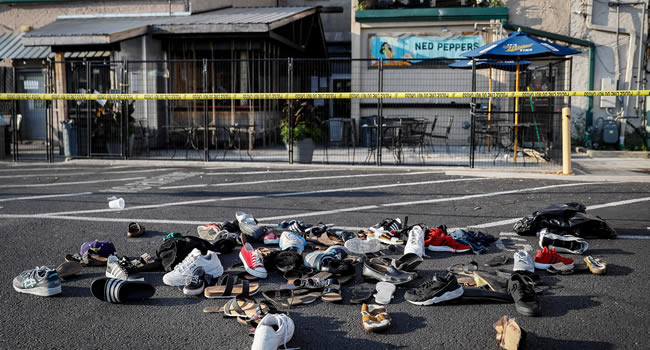 The news of the death of eight people in a mass shooting at an Indianapolis FedEx facility in the United States last Thursday brought the number of such incidents in the last one month to 45.

From March 16, when eight people were killed at three Atlanta-area spas, the US has had at least 45 mass shootings, according to a survey carried out by a Washington-based non-profit organization, Gun Violence Archive (GVA).

The report said US has seen at least 147 mass shootings in 2021 with last month’s cases the highest in recent years.

In coming out with the statistics, GVA considers an incident to be a mass shooting if four or more people are shot, wounded, or killed, excluding the gunman.

Here is a breakdown of the 45 incidents reported since March 16 as enumerated by GVA.

Eight people were killed and several others wounded in a mass shooting at an Indianapolis FedEx facility in Indianapolis.

At least six people were injured at an Escambia County apartment complex.

Four people were shot, including a teenage girl, in Northeast Washington, DC.

Four people were shot, one fatally, and a fifth person was hit by a car in an early morning drive-by shootings.

One person was killed and three others injured in a shooting at a house party at an East Wichita Airbnb.

A toddler and three other people were injured when suspects fired shot into a business parking lot.

One person was killed and three others were injured, including a mother and child, after gunfire was exchanged in a Memphis neighborhood.

One person was killed and three others injured in a shooting at a convenience store.

Police responded to calls of a weapons complaint and found blood trails and four injured victims.

An incident outside a house party resulted in four people being shot and one critically injured.

One person was killed and at least five others injured when people in two vehicles shot at each other on a Fort Worth, Texas, freeway.

A gunman killed one person and wounded at least five others — four of them critically — at a cabinet manufacturer.

A former NFL player killed six people, including a prominent doctor, his wife and their two young grandchildren, before killing himself.

A 26-year-old man was charged with the shooting that killed two people and injuring two others at a gas station.

One person was killed and three others injured after gunfire erupted from a car.

Five victims were taken to a hospital with multiple gunshot wounds.

Police responded to distress call at a bar where they found six victims with gunshot wounds.

An argument between two groups of men devolved into more than 30 shots fired at a park on Easter, killing a woman and wounding five other people, including four children.

A man arrived at a home, threatening several people with a firearm before shooting four victims.

Three people were killed and four others injured in a mass shooting at a house party.

Two men were arrested and charged with attempted murder after five people were injured during a shooting outside an Alabama bar.

In what police said was an apparent murder-suicide plot, 21-year-old and 19-year-old brothers made a pact to kill their parents, sister and grandmother.

Seven people were injured by gunfire near a nightclub after a fight broke out into gunshots.

Four people, including a child, were killed and another person wounded in a mass shooting at an office complex in Orange, California.

people were shot in Washington. Two people died while three were seriously wounded.

Seven people were shot at a Cleveland nightclub. The victims, four men and three women, were all between 20 and 30 years old, and police believe several gunmen fired inside the nightclub.

Four people in an SUV were shot on the I-57 expressway. All were taken to hospitals in critical condition.

A man fatally shot his parents before shooting three people at a convenience store, killing two of them. The suspect killed himself before the police arrived the scene.

Four people were shot in Chicago’s South Austin neighborhood. The victims, who included men ages 42, 53 and 64, were near a sidewalk when they were shot.

At least seven people were injured in a mass shooting at a nightclu. Six of the victims were shot and another person suffered a laceration.

A shooting on a party bus left three people injured and one dead. Police say the occupants of another vehicle fired at the bus while it stopped at an intersection.

A gathering in Chicago’s Wrightwood neighborhood turned into a mass shooting, when two gunmen opened fire inside the gathering, wounding seven people and fatally shooting a 26-year-old man.

Michael Tucker, the man identified as the suspect, was found dead in a motel in Nashville the following day. Police spokesman Don Aaron said it is believed Tucker died of a self-inflicted gunshot wound.

Ten people, including a Boulder police officer, were killed in a shooting at a King Soopers supermarket.

One person was killed and another five were injured in a shooting at an illegal party.

“There were at least 150 people in there that fled and believed they had to flee for their lives,” Philadelphia Police Commissioner Danielle Outlaw said.

Eight people were shot, one fatally, by an unknown assailant, according to police.

Five people were shot after a disturbance inside a club. One was in critical condition after being shot in the neck, and the rest were in stable condition.

Four victims were taken to the hospital after a shooting in the city east of Portland.

Five people who were preparing a vigil in Stockton, in California’s Central Valley, were shot in a drive-by shooting. None had life-threatening injuries.