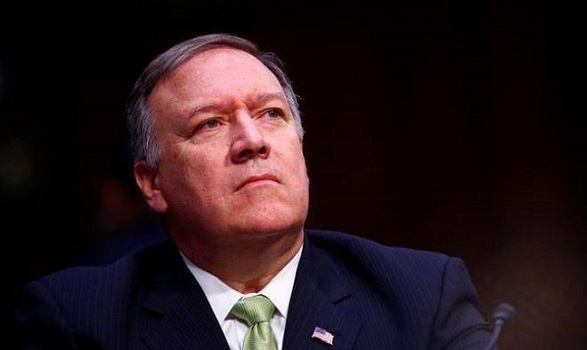 The new US Secretary of State Mike Pompeo has outlined a new strategy for dealing with Iran following President Donald Trump’s recent withdrawal from 2015 nuclear pact.

Speaking in Washington, Mike Pompeo threatened to place “the strongest sanctions in history” on Iran if its government does not change course as regards its negative influence in the Middle East.

While laying out a new strategy following the recent US withdrawal from a multinational nuclear deal with Iran, Pompeo said Washington “will apply unprecedented financial pressure on the Iranian regime”.

“The sting of sanctions will be painful if the regime does not change its course from the unacceptable and unproductive path it has chosen to one that rejoins the League of Nations,” Pompeo said during a speech at Heritage Foundation in Washington, DC.

Read Also: SUDAN: 19-yr-old sentenced to death for murdering husband who raped her

He also laid out a list of 12 “basic requirements” to be included in a new nuclear treaty with Iran.

Recall that days after withdrawing from the nuclear deal, defying last-ditch diplomatic efforts by European countries, the US slammed more economic sanctions on Iran.

According to US Treasury Secretary Steven Mnuchin, six people and three companies who have ties to Iran’s elite military force, the Revolutionary Guard Corps (IRGC) are affected by the sanctions.

Mnuchin said the sanctions targeted those who had funnelled millions of dollars to the group, funding its “malign activity”.

The sanction bars US individuals and entities from doing business with the affected entities following the move, which was carried out in conjunction with the United Arab Emirates (UAE).