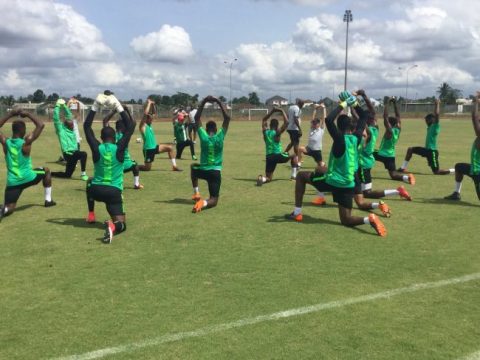 Super Eagles forward, Victor Moses has reunited with his national teammates in their London camp where they train ahead of a high profile friendly against the Three Lions of England billed for this weekend.

The Chelsea of England star did not return to Nigeria after he helped the Blues beat Premier League rivals Manchester United to win the English FA Cup on May 19.

He was permitted by Nigeria manager Gernot Rohr to rest while the other members of the team camped in Uyo, Akwa Ibom State ahead of their farewell friendly game against the Democratic Republic of Congo last Monday.

The Nigeria Football Federation (NFF) and the Super Eagles media team confirmed the forward’s arrival on their verified Twitter handle on Thursday.

“2018 World Cup camp update. @VictorMoses has arrived in camp. We will be training at the Barnet Stadium at 4.30pm today. #SoarSuperEagles #Team9jaStrong,” Super Eagles tweeted.

“Victor Moses has joined the team in camp, everybody is in now,” the NFF tweeted.

As it stands, a total of 26 players, including Moses Simon whose World Cup place is still in doubt, are at the London camp ahead of Saturday’s encounter in Wembley.

The team are also billed to face Czech Republic next Wednesday during their final camping in Austria ahead of the World Cup finals in Russia.