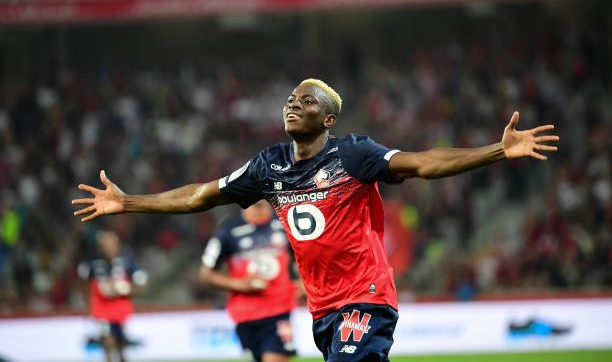 Super Eagles forward, Victor Osimhen scored yet again for Lille in their 2-1 victory over Angers in French Ligue 1.

The 20-year-old, who joined the French giants at the start of this season, has now scored five goals in five league matches.

Osimhen opened the scoring for Lille in the 39th minute before Brazilian winger Luiz Araújo doubled the lead eight minutes into the second half.

The hosts thought they were heading to a clean sheet victory when Angers pulled one back in the 87th minute through Stéphane Bahoken.

Osimhen is now at the top of Ligue 1’s scorers chart as Friday’s goal means he moves ahead of Dutch forward Memphis Depay of Olympic Lyon in the top scorers chart.

Prior to the game, both players were on four goals each.

Recall that Osimhen was also on target for Nigeria in Super Eagles’ 2-2 international friendly draw against Ukraine last Tuesday.