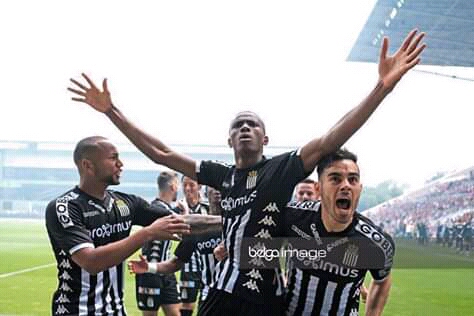 Having had a successful loan spell at the club, Super Eagles forward Victor Osimhen has linked up with Belgian club Sporting Charleroi on a permanent transfer.

The 20-year old, who spent the entire last season at the Belgian giants, was loaned from German outfit, Wolfsburg.

Osimhen recorded 20 goals as well as four assists in 36 games in all competitions, and was crowned the club’s best player of the season.

According to a report in French online news outlet, lequipe.fr, Charleroi have activated the €3.5m buyout option in the agreement to make the forward their first signing of the summer.

Read Also: Team stripped of trophy after player posed for a photo with his foot on it

However, Charleroi are expected to sell the Victor Osimhen this summer with AC Milan, Southampton and Lille already linked with the striker.

Charleroi will demand between €12m and €15m from any of the suitors which will represent a significant profit for them.

Osimhen joined Wolfsburg in 2017 following his exploits with Nigeria’s U17 side at the cadet World Cup in Chile in 2015 where he won the Golden Boot and Silver Ball awards.

His time with Wolfsburg was blighted by injuries and he made just 14 league appearances for the club.