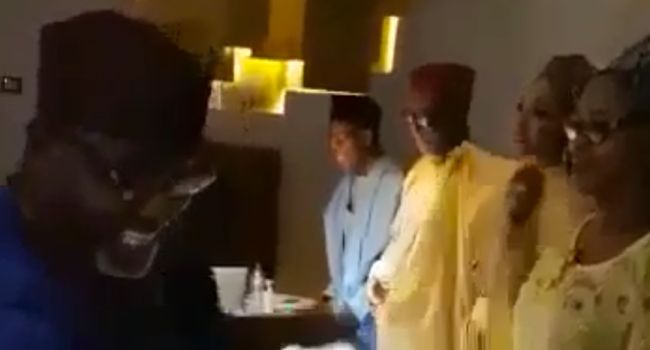 Embattled former Governor of Imo State, Rochas Okorocha who is one of the 23 presidential aspirants of the ruling All Progressives Congress (APC), was able to appear at the Transcorp Hilton Hotel, Abuja, venue of the presidential screening of the party on Tuesday night at the nick of time, after securing a N500m bail at the Federal High Court.

The Imo West Senator who is standing trial on a 17-count charge bordering on conspiracy to steal N2.9 billion public funds during his tenure as Imo State Governor, was granted bail with stringent conditions by the presiding judge, Justice Inyang Ekwo on Tuesday.

And while many thought he could miss the APC screening if he failed to meet the bail conditions, Okorocha was able to pull the chestnut out of the fire and appeared at the screening venue on the last day of the exercise.

As speculations were rife that he may not appear at the screening, one of his legal counsels, Steve Asimobi, had, in a chat with journalists, assured that Okorocha would be attending the screening exercise.

“His Excellency, Rochas Okorocha would be attending the APC presidential screening later today,” Asimobi had said.

“The court has granted him bail. Of course, there were two options, either to remand him in Kuje prison or the EFCC custody pending when we meet the bail condition.

“Hence the judge asked the EFCC to keep him in protective custody, and that is a usual administrative procedure. The judge also ordered the EFCC to return his international passport to the court today with immediate effect.

“As I speak to you, the sureties required are currently in court with all the requirements, and they’re processing it.

“So, once we’re done with these, the judge would order the EFCC to release him. He’s only under the protective custody of the EFCC based on the directive of the court.”

He was forcefully arrested by operatives of the anti-graft agency at his Abuja home last week, and put on trial before Justice Ekwo on Monday before he was granted bail the following day after his legal team filed an application for an administrative bail.

From PDP, Dino Melaye cries out over Buhari’s request to APC governors

APC lawmaker hints at consensus candidate ahead of presidential primaries