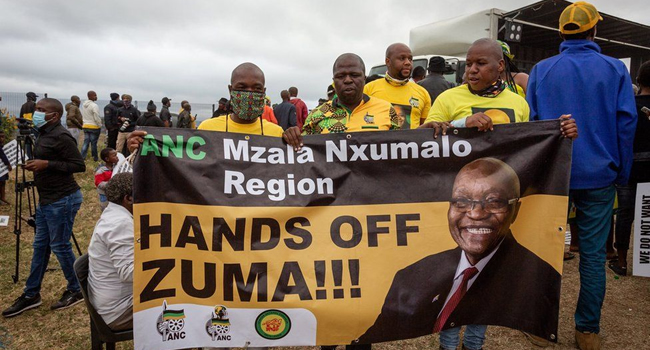 South African police have arrested 28 people after one of the country’s biggest highways was blocked following violent protests that broke out against the imprisonment of former President, Jacob Zuma.

Protests erupted on Saturday in parts of KwaZulu-Natal (KZN), Zuma’s home province, after the ex-leader handed himself over to police to serve a 15-month jail term for contempt of court.

A South African high court had, on Friday, dismissed Zuma’s application to have his arrest overturned in a case that has been seen as a test of the rule of law in the post-apartheid nation.

Zuma was given the jail term for defying an order from the constitutional court to give evidence at an inquiry investigating high-level corruption during his nine years in power.

Though he had denied there was widespread corruption under his leadership, he refused to cooperate with the inquiry that was set up in his final weeks in office.

KZN police spokesman, Jay Naicker, said the 28 people arrested will be arraigned in court on Monday on charges including public violence, burglary, malicious damage to property, and contravention of COVID-19 lockdown regulations.

Naicker said protesters had set alight some trucks near Mooi River, a town on the N3 highway that leads from Durban to Johannesburg, and shops had been looted in Mooi River and eThekwini, the municipality that includes Durban.

“Law enforcement officers have been deployed to all districts in the province but there had been no deaths or injuries so far,” the police spokesman added.

One of Zuma’s spokesperson who was asked about the protests by journalists, said the people were only expressing their righteous anger because of the injustice meted out to the former President.

“The righteous anger of the people is because of the injustices that they see being dispensed to President Zuma.”

My husband was riddled with bullets —Wife of assassinated Haiti President