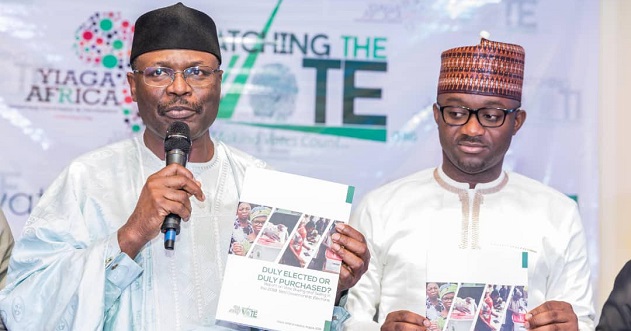 In its determination to curb the menace of vote buying in the 2019 general elections, the Independent National Electoral Commission, INEC, has said it is considering disallowing smart phones at polling stations.

The Chairman of the commission, Mahmood Yakubu, stated this on Friday at an Election Dialogue Series organised by a civil society organisation, YIAGA’s WatchingTheVote, at Sheraton Hotels, Abuja.

According to him, mobile phones would be collected from voters when they collect their ballot papers at the polling stations, to curb vote buying in the country.

”The commission would try and ban the use of some devices that aid vote buying on election day such as mobile phones,” Mr Yakubu said.

Yakubu explained that those who carry mobile phones along to polling units normally use them to take pictures of the ballot papers as evidence to the vote buyers.

”But I also think that the political parties may be for a shocker because there are also smart guys in Nigeria that would snap and send to others through whatsapp and one ballot paper may be claimed by hundreds of people.

”We are looking at that possibility to tell citizens that have smart phones not to come to polling units on election day with the smart phones.”

The INEC also harped on the role of INEC in the Electoral Act that requires it to prosecute electoral offenders, which include vote buying.

”But what about the other agencies that worked with the electoral commission like the security agencies? It is first and foremost about the enforcement. There are laws in the book against vote buying and in any country that the laws are not enforced, then that nation is doomed. It is about enforcement.

”What we have been doing is to work with the security agencies to see if they can make the arrests, investigate and when the case file is ready, we can work together and prosecute.

”We have done such with some success in one of the state constituency elections we conducted in 2016 in Kano. In a constituency, we successfully prosecuted over 40 electoral offenders, working with the police. It was the highest prosecution held in the history of the commission. Who did we prosecute? The hoodlums in the polling units”.

Mr Yakubu further said the commission was looking forward to prosecuting offenders who sponsor elections, adding that the commission has over a hundred cases of electoral violations in previous elections.

He also disclosed that INEC is working with relevant institutions to address the menace of curbing violations that occur before the elections whereby cash electronic transactions were made to buy votes.

”We are looking forward to the day when we prosecute their sponsors. If we don’t get them, the problem would still continue to exist. As we speak, we have over 100 case files submitted by the police for violations in previous elections and we are diligently prosecuting the offenders, including officers of the commission. So we are discussing with the security agencies to see what we can do to this respect”, Yakubu said.

PDP calls for the arrest and prosecution of Adeosun

Adeosun admits certificate is fake, says ‘I did not know’