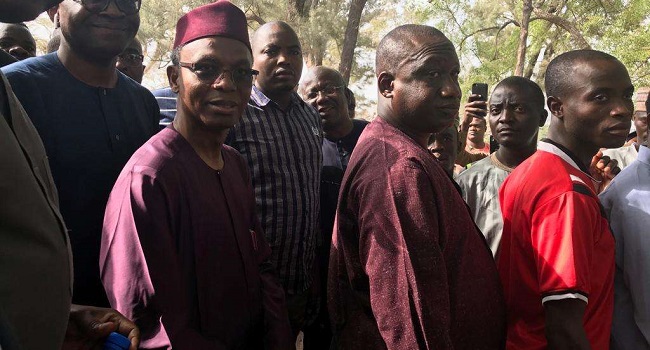 Scores of prospective voters waiting to cast their votes at Unit 024 Ungwar Sariki ward where Governor Nasir El-Rufai is expected to cast his vote have taken their seats after three card readers broke down.

According to reports, INEC officials are making efforts to manage the situation after the three card readers developed a technical fault midway into accreditation and voting.

In a similar situation, the absence of officials of the Independent National Electoral Commission (INEC) at ward 11, unit 22, Olusomi Compound, Abeokuta-North Local Government area of Ogun state where former President Olusegun Obasanjo is billed to cast his vote, has left many eligible voters stranded.

Reports say as at 9:12am INEC officials were yet to arrive the polling unit causing apprehension among many who want to perform their civic rights by casting their votes for desired candidates.‎