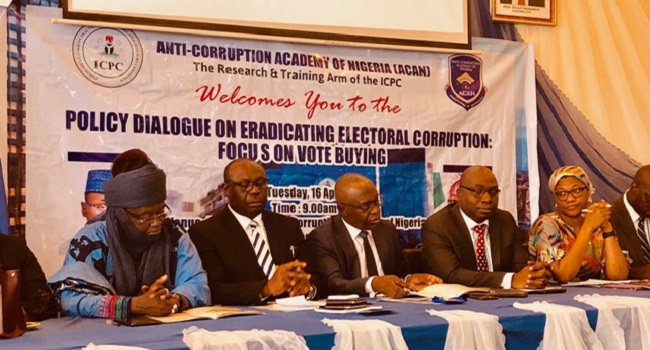 The Independent National Electoral Commission (INEC) chairman, Professor Mahmood Yakubu, on Tuesday boasted that votes now count in Nigeria, and that the electorates are the ones who determines outcome of poll results.

Yakubu claimed that the development was as a result of electoral reforms in the last nine years.

He however noted that irregularities now witnessed during elections are caused by politicians, who according to him, are becoming desperate to engage in malpractices because of their frustration by the new order.

He stated this in Keffi, Nasarawa State at the “Anti-corruption policy dialogue on eradicating electoral corruption: Focus on vote buying”, put together by the Independent Corrupt Practices and Other Related Offences Commission (ICPC).

Yakubu’s address was read out by a National Commissioner in-charge of Information and Voter Education, Festus Okoye.

He said, “You can see that our elections are getting better and the politicians are getting more desperate. And these accounts for some of the challenges we have.

“As votes start to count, as the election are determined solely by the electoral votes, politicians now go directly to the polling units to induce the voters. And I say that the votes are beginning to count.

“Voter inducement before and after voting is manifested in two ways first is attempts by politicians and their agents to determine the choice of voters by offering them monetary or material rewards. Second is the attempt by prospective voters to demand such gratification in order to vote.

“In response to these challenges, INEC has adopted the following measures: changing and enhancing the secrecy of votes through polling unit management and locating the voting unit boxes outside for the view of party agents and the voters.”

Speaking on the laws to apply on offenders he said: “The provisions of sections 124, 125 and 129, 1 and 130 of the Electoral Acts 2010 as amended provide us with clear indications of the illegality of vote buying and selling. “While section 124 stipulates offences relating to bribery and conspiracy, section 125 reinforces the requirements of secrecy in voting. Section 124 subsections 18 (d) and 13(a) simply spelt out what constitutes electoral offences and undue influence with specific reference to vote buying and selling. The punishments for contravening these provisions as stipulated in sections 129 and 130 respectively.

“Beyond the provisions of the Electoral Act legal provisions due to bribery and corruption particularly the enabling Act of the ICPC. EFCC and FIRS, as well as the administration of justice Act makes voters’ inducement and vote buying a criminal act.”

Also speaking, the acting chairman of the Economic and Financial Crimes Commission (EFCC), Ibrahim Magu, who was represented by his secretary, Olukayode Olanipekun, assured to always work with security operatives and the ICPC in the battle to stamp out vote buying and selling.