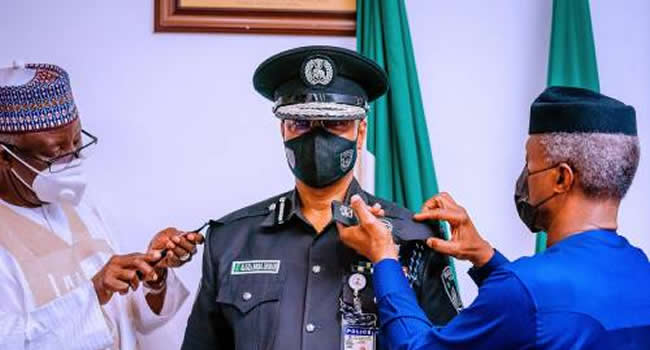 Ripples Nigeria gathered that the event held at the Vice President’s Conference Hall.

Amongst dignitaries in attendance were: the outgoing IGP, Mohammed Adamu; the Secretary to the Government of the Federation, Boss Mustapha; the Minister of Police Affairs, Maigari Dingyadi; Senior Special Assistant to the President on Media and Publicity, Garba Shehu and his colleague in the office of the Vice President, Laolu Akande.

Alkali was named as the new Acting Inspector General of Police by President Muhammadu Buhari on Wednesday.

He replaced Adamu who is retiring from the police and as the inspector-general.

The announcement of the new police chief was made by the minister of police affairs while briefing journalists at the State House in Abuja on Tuesday.

The appointment comes soon after the police headquarters in Owerri, Imo State, was attacked by gunmen.