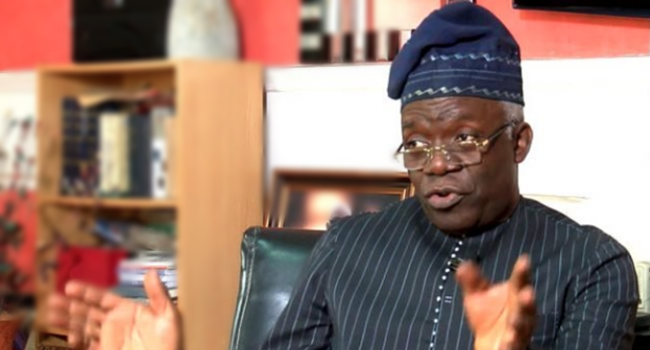 A Human rights lawyer, Femi Falana (SAN), has reiterated the call on the Attorney General of the Federation, Abubakar Malami, to produce the indicted soldiers involved in the brutal murder of three policemen over suspected kidnap kingpin, Bala Hamisu alias Wadume, in court for trial.

In a statement on Sunday, Falana argued that the excuse that the indicted soldiers would face a court-marshal was illegal.

According to him, the military’s court-martial lacked the competence to try the soldiers for terrorism offences committed against police personnel or other members of the public.

The statement read in full:

“The Attorney-General of the Federation and Minister of Justice, Mr. Abubakar Malami SAN was reported to have said that the soldiers indicted in the brutal murder of 3 policemen who arrested a suspected kidnap kingpin, Bala Hamisu (alias Wadume) could be tried by a court-martial.

According to the Minister, “They are military personnel. First, they are to go through the in-house processes. There are two options – either to charge them before the court-martial which is a special court established by law for the trial of soldiers or in the alternative for the military after consummation of the in-house processes should consider handing them over for trial.”

With respect, the offence of terrorism allegedly committed by the indicted soldiers are not provided for in the Armed Forces Act. To that extent, a general court-martial or special court-martial lacks the jurisdictional competence to try the offence of terrorism committed against police personnel and other members of the public by soldiers who are subject to service law.

For the avoidance of doubt, Section 32 of the Terrorism Prevention Act 2011 as amended by the Terrorism Prevention Amendment Act 2013 provides that “The Federal High Court located in any part of Nigeria, regardless of the location where the offence is committed, shall have jurisdiction to (a) try offences under this Act or any other related enactment; (b) hear and determine proceedings arising under this Act”.

Hence, the indicted soldiers were properly charged with terrorism along with other suspects in the only competent court in the land.

However, since the military authorities did not release the suspects to the Police for the purpose of arraigning them in court the learned trial judge, the Honourable Justice Binta Nyako rightly ordered the Chief of Army Staff to produce them to answer to the heinous charge of terrorism and allied offences. Even though the Attorney- General withdrew the charges against the indicted soldiers the order that they be produced in court for arraignment has not been vacated or quashed either by the trial court or the Court of Appeal.

Therefore, the Attorney-General is duty-bound by law to ensure full and unconditional compliance with the valid and subsisting order of the federal high court in accordance with section 287 (3) of the Constitution”.