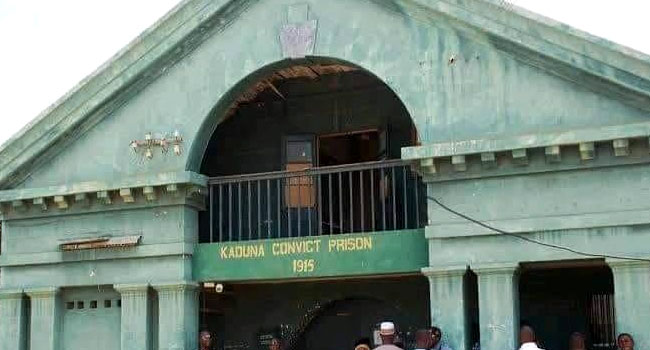 The last may not have been heard about the attempted prison break by inmates of the Kaduna Correctional Centre, as reports say about eight of the inmates believed to be arrowheads of the attempt may have been killed.

It would be recalled that inmates at the centre had embarked on a protest that later turned violent over concerns that they may contract the dreaded COVID-19 disease that is sweeping across the world, because of the over crowding and lack of proper ventilation at the correctional centre.

Though the Nigeria Correctional Service (NCS) said one inmate died while officers were trying to quell the riot, sources say eight people were moored down.

The names of those said to have been deliberately killed by warders at the centre were given as Hammed Abdullahi, Lucky Ugokama, Ibrahim Abukabar, aka Baba Lolo, Yahu Salisu, Elvis Wisdom Adekpe, Lucky Njoku, Oluchukwu Oche, also known as ‘No Witch’, and Ibrahim Abdullahi, while Ogume Osifo Osarome is said to be in critical condition after being severely tortured.

According to sources, they were killed because they are believed to have spearheaded the protest the inmates embarked upon to demand for their safety.

The sources also disclosed that on April 1, a day after the unrest, prison waders went round cells and ordered those believed to have spearheaded the protest to come out.

One of the sources said: “One Hammed Abdullahi was shot in the stomach by a prison guard, he died immediately.

“Yahu Salisu was shot in the buttocks while Ibrahim Abdullahi died of torture.

“Lucky Njoku was beaten to death by prison guards, he died of the wounds inflicted on him.

“Ibrahim Abubakar died yesterday too from the beatings he received from the prison guards.”

There are however efforts, according to sources, by Management of the Kaduna Correctional Centre to cover up the killings.

The spokesman of the centre, Muhammad Jalige, while responding to enquiries over the reports, insisted that the matter was “an internal problem between staff and inmates of the correctional facility”.