Home » Politics » We have an ‘epidemic of sycophancy’ in Nigeria— Dogara 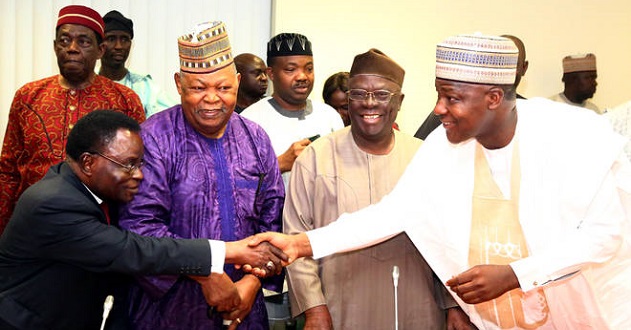 Speaker of the House of Representatives, Hon Yakubu Dogara, says Nigeria is in the “midst of an epidemic of sycophancy”.

Dogara noted that for Nigeria to develop and realise its true potentials, the country must undertake restructuring.

He stated these when he received a delegation led by Chief Ayo Adebanjo, from Southern and Middle Belt Leaders Forum comprising of leaders of Afenifere, Ohaneze Ndi Igbo, Pan Niger Delta Forum and Middle Belt Forum.

The Speaker said, “I have said it before somewhere that in this country, we are in the midst of an epidemic of sycophancy. Where we have leadership, the tendency has always been to look at the leader and interpret what he wants and it is what the leader wants that is done and not what is right and that is an attitude that we will have to change as a people for true progress to come to us.

“Unfortunately, we are in an era in this country where the truth is becoming very, very scarce. They call it post truth era. That is the challenge, but if we fail to discover the truth, nothing will ever work. I hope that in this journey, you will discover the truth, we are committed to discovering and we will put them through the legislative mill,” he said.

Hon Dogara charged all Nigerians to be citizens of democracy working actively to ensure that democracy works in the country. He assured that other than recommendations that require constitution amendment, the House would work closely with the delegation to meet their demands of restructuring and true federalism.

Speaking on why he supports restructuring, the speaker said it would help Nigeria to be more productive but there must be consensus among leaders of all regions of the country on best ideas and formula to undertake the process in a way that will benefit all parties.

He added that disagreements may emerge during the deliberation process but that is how progress can be made.

He stated that, “Restructuring, for most of us, is something that we must undertake as a country and I am not saying this because I want to please you because our leader, Chief Ayo Adebanjo, strongly made a case for restructuring. I am saying so because there is no enlightened person at this time, on the streets of Nigeria that will fault the idea of restructuring. None. Maybe it was because of the way it was presented and packaged that led to fear for certain sections of this country. Obviously, you should understand that.

“But the truth is that, if you look at it, what was the real reason for the formation of Nigeria, for bringing together all these regions to form Nigeria? You begin to assess whether we have realised 20 percent, 30 percent, 40 percent or 50 percent of the purpose that there was this amalgamation that formed Nigeria. If the answer is that we are not close to our peers, we have not even realised 30 percent of why the regions were amalgamated, that shows that something is wrong. You do not need to go further to investigate whether something is wrong with Nigeria, you do not need to be told that something is wrong.

Earlier, the delegation presented a position paper to Speaker Dogara where they stated, among other things, that they want legislative support to provide for restructuring that would produce federating units that will promote unity, and peace by creating a sense of belonging among all Nigerians.