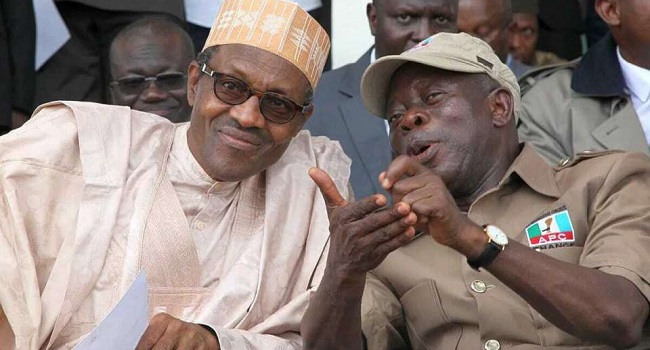 The Peoples Democratic Party (PDP) Wednesday accused President Muhammadu Buhari of concealing alleged bribery and corrupt practices involving the All Progressives Congress (APC) national chairman, Adams Oshiomhole, whom it noted “is being investigated by the Department of State Services, DSS”.

The party said it has uncovered information that pressure is being mounted by the presidency on the DSS, which reportedly detained and interrogated Oshiomhole, to let him off the hook for fear that the investigation will unearth the complicity of the presidency and other key APC members in the alleged scam.

In a statement issued by the party’s spokesman, Kola Ologbondiyan yesterday, the PDP said information available to it “reveals that apart from the billions of naira, he allegedly stole from the coffers of Edo state when he was governor, Oshiomhole is facing charges of allegedly collecting billions of naira bribe from some ministers and other APC sources in Adamawa, Rivers, Kano and Imo states to manipulate the 2019 electoral process.

“This is in addition to allegedly collecting billions of naira from Presidency sources to influence electoral officers, independent observers and certain polling organizations ahead of the 2019 election, part of which was allegedly diverted for personal use of some APC leaders.”

The PDP noted that it had always alerted Nigerians of the corruption allegation burden on the former governor and the continued official cover provided for him by the Presidency including the alleged stalling of his investigation and prosecution by the Economic and Financial Crimes Commission, EFCC.

“If the Presidency has nothing to hide; if it is not complicit in the alleged scam, it should allow the DSS and EFCC a free hand to investigate and prosecute his party’s chairman, Adams Oshiomhole, particularly now that all issues are laid bare before Nigerians.

“As long as the DSS and the EFCC are not allowed to put Oshiomhole into the dock, the Presidency does not have the moral rectitude to speak on corruption,” it added.