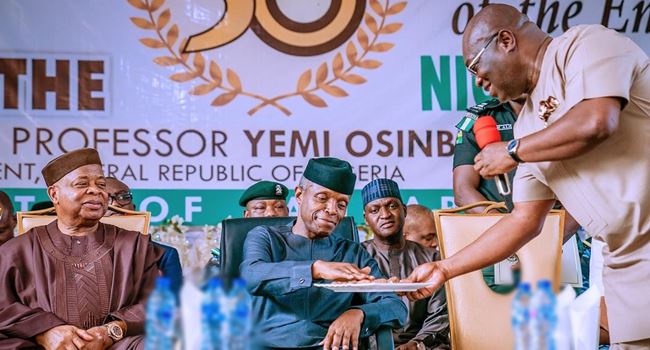 Vice President Yemi Osinbajo, on Monday, in Umuahia, the Abia State capital, emphasised on the need to avoid situations that led to the Nigerian civil war

The Vice President, who was speaking at a special town hall meeting organised by the Ken Nnamani Centre for Leadership and Development, in conjunction with the National War Museum, to commemorate the 50th year anniversary of the Nigerian civil war, said the war was a defining national tragedy that should not be allowed to repeat itself.

Noting that the cost of the war included loss of opportunities for national advancement, Osinbajo said: “The way to celebrate national fallen heroes that paid the supreme sacrifice for the union called Nigeria is to ensure that the circumstances that led to the conflict never occur again.

Read also: FASHOLA TO STATE GOVTS: You must pay compensations for road projects

“Unlike many African countries with protracted multi-generational conflicts, our strife lasted only three years, and we have suffered not to relent in ending the issues after 50 years.

“We have invested in national integration, peace building and reconciliation.”

The vice president, who explained that there would always be challenges in ending the issues facing the country, insisted that those issues should not induce hopelessness or desperation.

The convener of the meeting and Chairman, Ken Nnamani Center for Leadership and Development, Senator Ken Nnamani, while speaking earlier, noted that the 50th anniversary of the end of the civil war was in every respect, a highly significant milestone in the life of Nigeria as a nation.