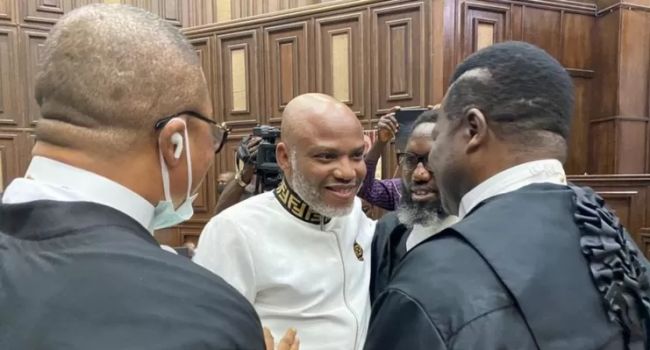 Mr. Shuaibu Labaran, the prosecution counsel in the ongoing case between the federal government and the leader of the Indigenous People of Biafra (IPOB) Nnamdi Kanu, has explained that the Department of State Service (DSS) provided Kanu with new mattress, pillow and clothes as directed by the Judge, but he (Kanu) refused the clothes.

Contrary to the order of Justice Binta Nyako, Kanu appeared before the Federal High Court in Abuja on Wednesday for his trial, putting on the same Fendi designer clothes he has been wearing since June last year when he was arrested.

Justice Nyako had on Tuesday, ordered the DSS to allow Kanu to have a change of cloth, as well as a good mattress.

Meanwhile, when the matter was called up today, Mr. Labaran, told the court that Kanu was the one that chose to wear his designers Fendi clothes.

He said: “My lord, based on your order yesterday, we provided the Defendant with a new Orthopedic mattress, pillows and blankets.

“As for his appearance, he chose to wear this particular one because he said that it is designers”.

However, Kanu’s lead counsel, Chief Mike Ozekhome, SAN, told the court that Mr. Labaran’s claim was not entirely true, noting that his client had not insisted on wearing the same clothes.

He confirmed that the DSS provided Kanu with new mattress and pillows.

“I want to commend the DSS and the court for ensuring that it was done”.

Kanu is being arraigned on 15 count charges bordering on treasonable felony and terrorism.