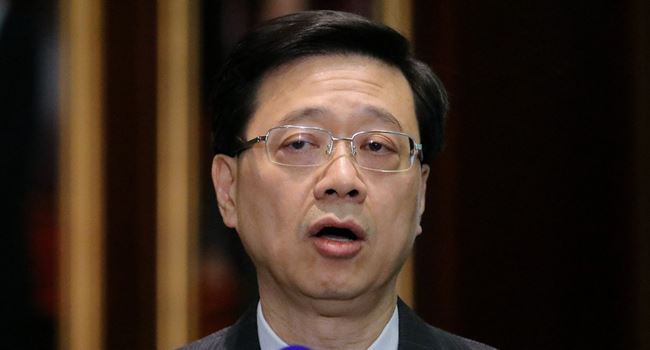 Hong Kong officials have faulted the President of the United States of America, Donald Trump for moving to strip the city of its special status in a bid to punish China for imposing national security laws on the semi-autonomous nation.

Security minister, John Lee told reporters on Saturday after Trump said the city no longer warranted economic privileges, that Hong Kong could not be threatened and would push ahead with the new laws imposed by China.

“I don’t think they will succeed in using any means to threaten the [Hong Kong] government, because we believe what we are doing is right,” Lee said.

Trump had announced the decision at a White House news conference on Friday, saying Beijing had broken its word over Hong Kong’s autonomy.

He said its move was a “tragedy” for the people of Hong Kong, China and the world.

“We will take action to revoke Hong Kong’s preferential treatment,” he said, adding that Washington would also impose sanctions on individuals seen as responsible for smothering Hong Kong’s autonomy.

Trump while launching the attack on Beijing, named misdeeds that range from espionage to the violation of Hong Kong’s freedoms, and announced a slew of retaliatory measures that will plunge US-China relations deeper into crisis.

“They’ve ripped off the United States like no one has ever done before,” Trump said of China, as he decried the way Beijing has “raided our factories” and “gutted” American industry, casting Beijing as a central foil he will run against in the remaining months of his re-election campaign.

Mr Trump said that he no longer considered Hong Kong to be separate from China but stopped short of an immediate end to the territory’s cherished privileges that have helped it remain a global financial center.

GEORGE FLOYD: Protests intensify in the US, as states activate National Guard troops

INEC clears air on purported issuance of letters of employment