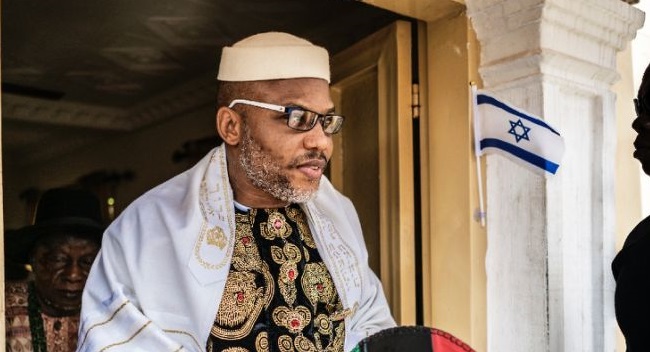 Leader of the Indigenous People of Biafra (IPOB) Nnamdi Kanu, has explained why his group recently set up the Eastern Security Network (ESN).

Kanu and his group launched the ESN last Saturday. They said it was a security outfit like Amotekun and would ensure the protection of lives and property of the people of the old eastern region.

In a statement on Tuesday, December 15, Kanu explained that “having waited for many years for our governors to secure our land as Yoruba governors did to no avail, we, the people of the East comprising of South-East and South-South have resolved to defend our land from the ravages of terrorism and extrajudicial killings.”

The statement read in detail, “We can’t allow what happened in Obigbo to repeat itself. It has fallen on this generation to defend our land against the ravages of Fulani terrorism and the hegemonic tendencies.

“For years, our mothers have not been able to visit their farms for fear of being raped and cut to pieces. Our invaders, some of them from Sene-Gambia, are in our villages raping and killing at will.

“Delta State Government has inaugurated Operation Delta Hawk, a new security outfit in the classic fragmented approach of the East to issues of national importance.

“The West were united in their effort to combat terrorism in their territory, even Miyetti Allah, had the guts to float a vigilante outfit the spread to every nook and cranny of Nigeria with the support of the Presidency and northern governors.

“But in our land, governors in the East cowardly allowed themselves to become fragmented out of fear of displeasing their masters.

“I present to the world our first and last line of defence, the Eastern Security Network to bring to an end years of terrorism in our land.

“This security outfit, modelled along the lines of Amotekun in the West and Miyetti Allah vigilante group in the North, will provide the entire East (South-South & South-East) with the necessary assurance that crimes such as kidnapping, armed robbery, illegal occupation of our forests and river banks by marauding killers from the Sahel are brought to an end with immediate effect.”

Another round of banking consolidation inevitable –McKinsey