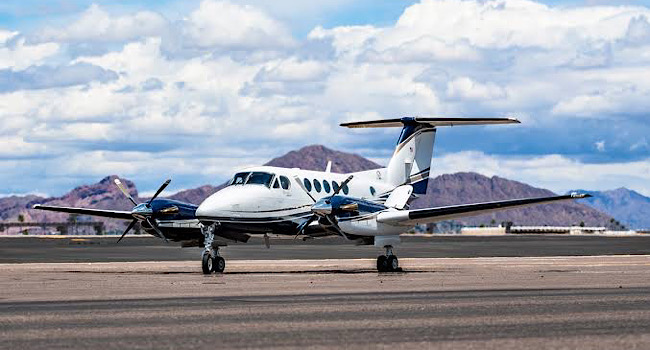 An aircraft belonging to the Nigerian military crashed on Sunday afternoon, killing all six passengers and crew members on board at the runway of the Nnamdi Azikwe International Airport, Abuja enroute Minna, the Niger State capital.

Here are some things you should know about the King Air aircraft series.

The King Air 350 is part of the Beechcraft Super King Air family, a line of twin-turboprop aircraft produced by Beechcraft.

According to entries on Wikipedia, the Model 200 and Model 300 series were originally marketed as the “Super King Air” family, when the “Super” designation was dropped in 1996.

The manufacturers, Beechcraft, had originally designated the King Air family of aircrafts for military purposes at inception in 1972, with the first flight on October 27 same year, but extended its role to civil aviation in 1974.

According to reports, the 350ER (B300CER) is available to government, military and commercial customers for special mission operations such as aerial survey, air ambulance, flight inspection and surveillance.

It is also interesting to know that the Super King Air family has had the longest production run of any civilian turboprop aircraft in its class, outlasting all of its previous competitors.

The King Air series of aircraft has a fairly long history of air crashes with the first occurring on February 21, 1980, involving a Model 200 operating as Advance Airlines Flight 4210, which crashed adjacent to the runway at Sydney Airport, killing 13 people. It was the worst civil aviation accident in Australia since 1968.

Also on May 24, 1981, a Super King Air 200 of the Ecuadorian Air Force crashed into a mountain, killing all the nine passengers on board, including the then President of Ecuador, Jaime Roldós Aguilera.

The history of crashes continued on February 17, 1993, when a Turkish Air Force Super King Air B200 transporting Eşref Bitlis (the General Commander of the Turkish Gendarmerie) crashed minutes after taking off from the Güvercinlik Army Air Base in Ankara. All the five passengers on board were killed, with one injury on the ground, while on the 4th of September, 2000, a King Air model 2000 shortly after departing from Perth, in Western Australia, failed to respond to ATC after flying above its designated altitude.

The aircraft was said to have flew around Australia for five hours before crashing and killing all the eight people on board.

A Super King Air 200 carrying the Oklahoma State University basketball team crashed in Colorado on the 27th of January, 2001, while another crash, involving the same model crashed on the 26th of February, 2004, killing President Boris Trajkovski of the Republic of Macedonia and eight others.

Another model 200 of the Super King Air on October 24, 2004, while carrying the Hendrick Motorsports Team, crashed in a mountainous terrain in Virginia, United States, killing everyone on board.

Similarly, on October 30, 2014, a B200 King Air crashed at Wichita, Kansas, United States, with the pilot and three people on the ground killed while six people were injured.

At the Indira Ghandi International Airport, New Delhi, all 10 persons in a B200 King Air aircraft were killed after it crashed on December 22, 2015. One other person on the ground was also injured.

On February 21, 2017, tragedy struck again when a B200 King Air struck the roof of a shopping center building and crashed just after taking off from Essendon Airport in Melbourne, Australia with all five people on board killed.

In most recent accidents, a Pakistan Army King Air 350i crashed on July 30, 2019 in Punjab, Pakistan killing all five aboard, while on September 1, 2019, a B300 King Air crashed into a resort in Calamba, Philippines, killing the nine people on board and injuring two others on the ground. Similarly, on July 15, 2020, seven people were killed when a B350 King Air crashed on Mount Artos in Turkey.