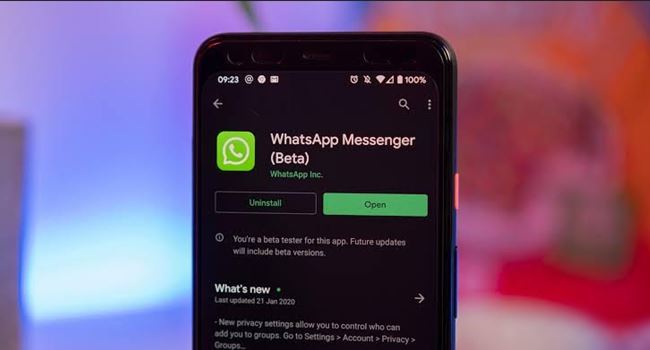 Recently, the rivalry between 6 years old Telegram and the Mark Zuckerberg-owned Whatsapp has become intense. The heat of this competition has remarkably been instrumental to how these instant messaging apps have been constantly rebuilding, and upgrading existing features.

Whatsapp, especially, has been able to achieve this by outrightly spying on its closest competitor, the new Telegram, which launched with a number of improved features.

With so much to stake in the market, the fight is for Whatsapp to retain its over 1 billion existing users and further convert others who are yet-undecided on a messaging platform to explore.

The introduction of the dark mode theme by Whatsapp is another borrowed feature from Telegram. While this might be a way of bringing home a feature existing on its competitors app, Whatsapp is giving its users a reason to stay on its platform without feeling cut out from an offering existing elsewhere.

From the business side of things, this is how Mark Zuckerberg continues to maintain service leadership of the instant messaging space.

When tech giant Google once locked horns with Mark Zuckerberg with its development of a social networking site (Google+) similar to Facebook; the Zuckerberg’s team nailed its coffin eventually when Google backed out not minding the heavy investment that had gone into the product design and optimisation.

During that cold war between both companies, while Google was introducing new features to beat Facebook to the game, the Zuckerberg team, on the other hand, did not give in. Instead, Facebook doubled its upgrade and increasingly adapted features that might woo existing users out to try the new Google’s product.

Reviewing the nature of this market competition of Telegram, there is a lot in common to that of the Google case. As Google was silently building Google+ to overtake Facebook, Telegram is also seen building a product with the potential of displacing Whatsapp.

While Google/Facebook fight for dominance was two American brothers at war as both companies belonged to Americans, the Whatsapp/Telegram, however, is a fight between Russia and America.

Currently, Telegram is giving Whatsapp a big fight. Its range of features is enough to displace Whatsapp. But competition in the tech space is more than designing a set of user enticing features.

For instance, on Telegram, users can edit and retract live chats, unlike on Whatsapp. In fact, Telegram users can log in to their account on multiple devices at the same time and receive messages on every device.

Studying the trend as an analyst, Whatsapp seems winning this fight already, and Telegram risks wading close to the grave as its strong holds and offerings are being adapted.

Notwithstanding, there are still few other features lacking on Whatsapp to be addressed by the Zuckerberg team. Worthy review questions begging for answers: Will Whatsapp soon increase its group participant capacity? Will it review its image-compression policy to beat Telegram?

Yung6ix calls out MI for not supporting his music career