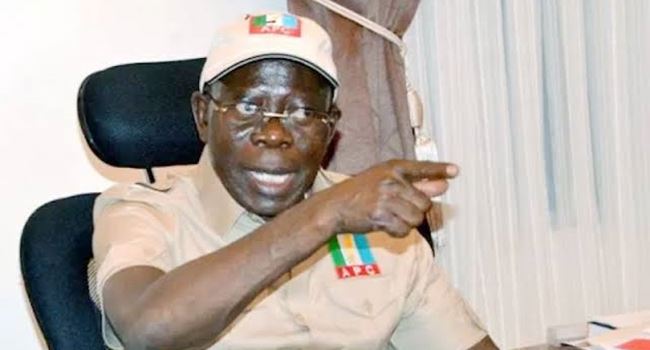 Comrade Adams Aliyu Oshiomhole, the former Governor of Edo State, ex-labour union leader and the immediate past National Chairman of the ruling All Progressives Congress (APC) party, was recently involved in a ghastly auto accident that claimed the lives of two policemen and injured others, some presently in critical conditions at the hospital. The grievous incident reportedly occurred close to Oluku junction, along Benin-Ore highway, when a trailer ran into the vehicle conveying the police from the back, knocking it into the bush before hitting Oshiomhole’s car. Oshiomhole escaped unhurt!

The controversial diminutive man from Iyamho was said to be travelling to join the candidate of APC and other top chieftains of the party in a rally scheduled at Usen, Ovia South-west Local Government Area of the state. Following the tragic incident the rally was called off in melancholic deference for the dead.

Edo state remains a volatile mid-western political space given the looming governorship poll scheduled for the 19th of this month. Violence had erupted in different areas and recriminations abound in different camps over importation and arming of thugs, rigging of the election and assassination plots from one party to the other.

There are two leading political parties and personalities slugging it out for the occupation of the Dennis Osadebay Government House in Benin City. The hitherto ruling (and now opposition) APC and the erstwhile opposition (and now ruling) Peoples Democratic Party (PDP). The personalities involved in the guber clash of the titans are the incumbent Governor, Godwin Obaseki, and the opposition challenger, Pastor Osagie Ize-Iyamu.

But Comrade Oshiomhole factors into the mortal electoral game due to the long-running feud with the incumbent Governor whom he helped come to power but who had denied him the ‘fruit’ of godfatherism. The Comrade is dominating the campaign with his oratorical power and experience as he did four years ago when he led the campaign for his now estranged successor.

The Edo guber poll is interestingly polarizing in many ways. And the outcome, one acceptable to every stakeholder or gladiator, may well be even more polarizingly interesting post-September 19. The consequence of victory or failure could be very hard to bear for the vanquished party. The drama, violence and accusations and counter-accusations had gone a long way to demonstrating what to expect in the event of manipulation from any quarters.

Following the devastating auto crash the State Publicity Secretary of the APC, Chris Azebamwan,‎ had alleged that the crash was a “premeditated plot” to take the life of the former Edo Governor whom he said had been “a thorn in the flesh of the PDP” since his return from Abuja to join the electioneering campaign of the APC candidate. Conspiracy theory or just an imagination gone wild?

The trailer, according to an eyewitness account, ran into the vehicle conveying the police team from the back, knocked it into the bush, before hitting Oshiomhole’s car, causing the death of two policemen in the convoy. But the media aide to the former National Chairman of APC, Victor Oshioke, had in a statement issued hours after the bloody incident alleged ‘assassination attempt’ on his principal!

Though accidents (some fatal) often happen on Nigerian ill-maintained delapidated roads this particular one involving the Oshiomhole ‘gang’ could be said to have had more than meets the eye. Was it a natural accident or an incident commanded and commandeered against the vociferous ex-Governor? Who wants him dead if the latter turns out to be true?

In politics high-profile figures had been eliminated in Nigeria and elsewhere around the world through conspiracies or conspiratorial machinations of powerful opponents. What we are insinuating here is that we had witnessed ‘arranged’ assassinations and near-assassinations involving the rich and powerful.

Comrade Oshiomhole is both loved and loathed in Edo state in particular and Nigeria in general. In equal measure you have those who see him as a success story in terms of gubernatorial stewardship. And above all, as a local ‘hero’ for standing up fearlesslly to the godfathers and moneybags during his eventful years as Governor. And others who think of him as a failure at the national political level who now, back home, desperately wants to ‘Tinubunize’ Edo politics for his percuniary interests.

Yet no matter how anyone sees him at the state or national level the Iyamho-born politician remains ever relevant in the scheme of things — especially in his home state of Edo. No matter his achievements or lack of same thereof he has cleverly positioned himself for the future, writing his story and history as it suits him.

By the time the controversial election in Edo state comes and goes someone somewhere would have cause to gnash his teeth in defeat. If the result favours the current Governor then Comrade Oshiomhole would have been killed politically in Edo State. Those who allegedly failed to ‘kill’ him on the Benin-Ore highway physically would have succeeded in sending him to political golgotha. And that bitter outcome may have been behind the Comrade’s desperation.

If Comrade Adams had been sent out of this world by the horrible accident then those that masterminded it allegedly must have hoped that without him by the corner of the so-called Pastor victory is assured. But now that he is still very much with us in flesh and blood there are fears that he could influence the poll one way or another if only to see his nemesis fall from his uneasy governorship perch.

We ask again: who wanted the Comrade dead? While we recognise that investigation is still on-going to unravel the circumstances surrounding the gory incident we can only say that nothing is impossible in politics Nigeriana. If Minister Bola Ige could be killed gruesomely in his bedroom and up until now no one had been apprehended or jailed for the murder then no one is safe!

For all intents and purposes no one may have wished Oshiomhole dead at 68. Yet someone somewhere could have wanted him dead to put a permanent end to his godfatherism inclination and meddlesomeness in Edo politics.

Whether dead or alive (however) what the Edolites simply want is a free and fair gubernatorial election where the people would have the chance to freely elect their Governor without intimidation, inducement or incitement to violence.