Why arms flow illegally to Nigeria, others – Buhari | Ripples Nigeria 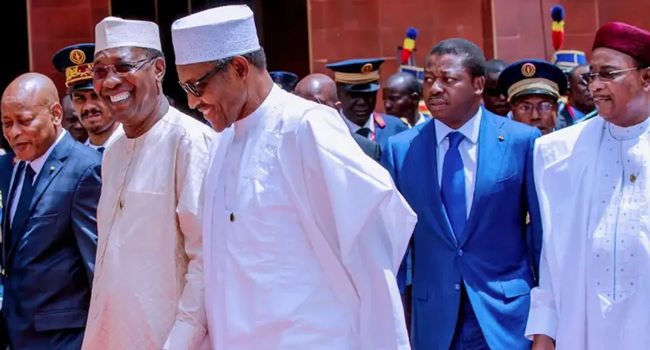 President Muhammadu Buhari on Thursday explained why arms and ammunition continued to flow illegally into Nigeria despite the government’s closure of the country’s borders.

The President, according to a statement issued by his Special Adviser on Media and Publicity, Femi Adesina, spoke when he received the outgoing Special Representative of the United Nations Secretary-General and Head of the UN Office for West Africa and the Sahel, Mohammed Ibn Chambas, at the Presidential Villa, Abuja.

He blamed the proliferation of arms in Nigeria on the current situation in Libya, saying once the North African country remains unstable, illegal arms and ammunition will continue to flow in the Sahel region of Africa.

He said: “We closed our land borders here for more than a year, but arms and ammunition continued to flow illegally.

“As far as Libya remains unstable, so will the problem remains.

“We have to cope with the problems of development, as we can’t play hop, step and jump. But we will eventually overcome those problems.

President Buhari said the late Muammar Gadaffi who ruled Libya for 42 years recruited armed guards from different countries, who later escaped with their arms when the Libyan leader was killed in 2011.

“They didn’t learn any other skill than to shoot and kill. So, they are a problem all over the Sahel countries today,” the President added.