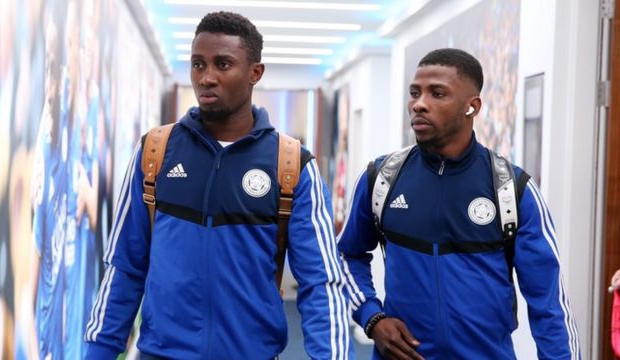 Super Eagles duo of Kelechi Iheanacho and Wilfred Ndidi have been ruled out of Leicester City’s Europa League tie against Legia Warsaw billed for Thursday.

While Iheanacho will be missing the game because of an issue with his travel documents, Ndidi will be serving a suspension.

Striker Iheanacho travelled to Poland for the game but a problem with his paperwork meant he was not allowed into the country.

“We’ll have to look at that when we’re back.”

Midfielder Ndidi will miss the game through suspension, having been sent off in their opening group match, a 2-2 draw at home to Napoli a fortnight ago.

Meanwhile, the Foxes defender Jonny Evans, 33, is again missing because of a foot injury.

Leicester opened their Europa League campaign with a draw at home andnwill be hoping to get a win at Legia, 15-time Polish champions, who have also struggled so far this season.

“They’re very well organised, the players are very committed, and on the counter-attack they can give us problems,” said Rodgers.

“In the last game and a half, we have been more like ourselves in our football, so hopefully we can bring that to Legia and make it really difficult for them.

“You travel to play in great stadiums in front of passionate supporters. It should be a great game in a great atmosphere, and it’s something you always have to deal with away in Europe.

“It’s been a great experience and we want to keep achieving it. It’s an ambition of ours to keep playing at this level. You have to earn it and that’s hopefully something we can keep doing over the next number of years.”

Pacquiao retires from boxing to focus on politics