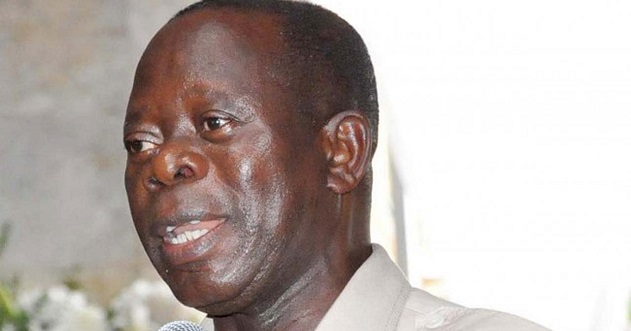 The All Progressives Congress (APC) national chairman, Adams Oshiomhole, has explained why he has been consulting with members of R-APC not to dump the ruling party.

He said that he cannot be ashamed for his action at it was borne out of a desirous endeavour in making peace and not as a result of cowardice or being jittery.

Oshiomhole made this clarification when he spoke at the launch of a book by Senator Bukar Abba Ibrahim (APC, Yobe-East ).

“Throughout the weekend and up till today (Monday ), many of the national dailies reported different stories with the impression that I have not been sleeping within the last one week as a result of alleged midnight meetings with aggrieved party members , who they say I have been begging not to leave the party.

“In some of the reports, the insinuations even went as far as saying that I made juicy offers to the aggrieved party members in stopping them from defecting. While I will not be too direct in reacting to such reports here, I will only say though I have been meeting aggrieved party members over whatever injustices they felt the party or some chieftains of the party had done to them. I have not been having sleepless nights as being reported , and also I am not in any way jittery.

“Rapprochement move, as far as I am concerned, is not an act of cowardice but a desirous endeavour in making peace since you can’t decree peace but only work for it. So, in a nutshell, I am not ashamed of doing that as chairman of a great party. To those who the rapprochement moves are being directed to, we want them to appreciate that we are more or less trying to prevent them from making a blunder of dumping palm wine for kain kain (local gin ).”

READ ALSO: My summon by police a ploy to stop mass defection of NASS members from APC— Saraki

Oshiomhole had allegedly described some members of the new Peoples Democratic Party (nPDP) block of the APC and other aggrieved members of the ruling party, as inconsequential and hired mercenaries, soon after the group formed R-APC and announced Buba Galadima as its national chairman.

Buhari meets Kwankwaso, others as mass defection looms in APC