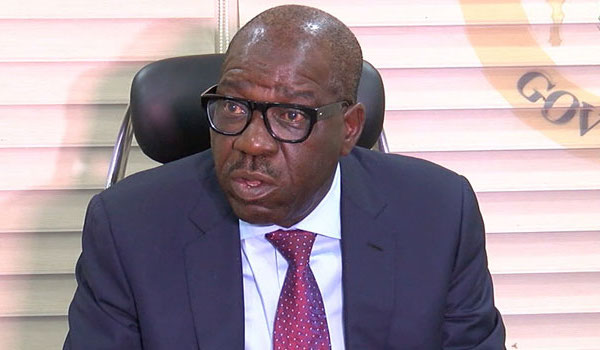 Edo State Governor, Godwin Obaseki, has hinted at the cause behind the rift between him and his predecessor, Adams Oshiomhole.

The uneding crisis in the governing party, the All Progressives Congress (APC), in Edo State has continously been blamed on the rift between Obaseki and Oshiomhole, who is the APC national chairman and immediate past governor of Edo.

The governor explained the cause of the crisis in the state at a meeting in Benin City with Benin Elders Forum.

He told the forum, “You are all witnesses to what is happening and I am sure that you will ask what exactly is going on. When the change occurred in 2016, I had no doubt in my mind to jump into the train to continue the reforms which we had started, but what I didn’t realise is that the rot was so deep and fundamental; it was not just a rot in physical expression but it was becoming cultural.

“You come into Edo and you cannot drive through the city, because we had warlords that had taken possession of everywhere. In fact, when we had to clear Lagos Street, we found out that people had erected stores and shops on the street. It then became clear that there was a lot more work to do.

“I just could not understand why Oredo Local Government Area, for instance, could not earn more than five million naira as taxes monthly, meanwhile, there were non-state actors who were celebrating having billions in their private bank accounts at the expense of government. Once I came in, these non-state actors began to almost physically threaten the state and I had no choice than to dislodge them in good faith.

“I thought this was something we had all agreed to do; I thought we were happy that now we can drive through Oba Market; I thought we were all comfortable with the sanity in the city. But today what do we have? A fightback from these characters and they are getting support from sources you can’t believe. How can you have a city and it is only those who refused to go to school and have turned themselves into thugs and touts that want to dominate our polity? How can we have progress?”

The governor, however, assured the people that his government, not minding supposed efforts to frustrate it, would not relent in making sure that the economy of the state was transformed.

“If we must develop, we must begin to grow the yam seed rather than eat it. We are four million people today, in another ten to twenty years, there will about ten million people. So, what’s the plan for the future? We will continue in our developmental strides as long as they impact on the lives of the ordinary Edo people,” he said.