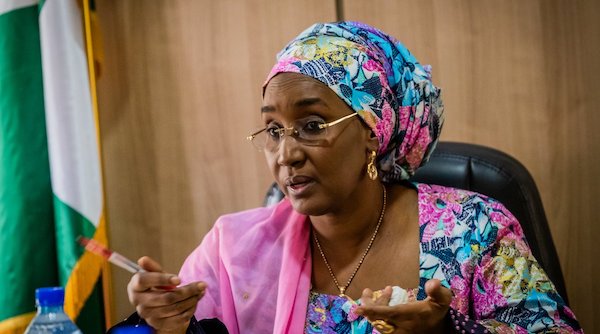 The National Social Investments Programme (NSIP) has provided reasons for stopping payment to food vendors in four states. It gave the reasons in response to the speculation making the rounds that Sadiya Umar Farouq, the newly appointed Minister of Humanitarian Affairs, declined approval of payment for school feeding in four states on suspicious grounds.

A statement signed by Ismaeel Ahmed, the Senior Special Assistant to the President on Social Investments, on Thursday, stated that the ministry “needed more time since the SIPs programme has been on transition from the presidency to the new ministry”.

President Muhammadu Buhari had set up the programme in 2016 with a view to combating child poverty by improving the living conditions of teeming millions of poor Nigerians.

The initiative commenced under the office of the vice president, Yemi Osinbajo, but was moved to the newly-established Ministry of Humanitarian Affairs, Disaster Management, and Social Development this year.

Online newspaper, Sahara Reporters had in a report in November revealed how a memo for the payment of vendors and caterers in 27 states had been sent to the minister for approval but only 23 states excluding Kogi, Lagos, Benue and Imo States were approved.

Ahmed also observed that “civil service procedures in the new ministry” and briefs contributed to the delay in the payment of stipends to N-Power volunteers for two months. He, however, disclosed that issues regarding payment delay had been settled while assuring that payment of arrears would resume.

“It should be noted that the former accounting Ministry, which is the Ministry of Budget and National Planning has to put on hold all processes of payments after the presidential instruction of the movement of the SIP.

“Hence, the necessary civil service procedures that needs to be set up in the new ministry and the briefings delayed payments for a bit,” Ahmed stated.

Read the full statement below:

Our attention has been drawn to an Exclusive Story reported by Sahara Reporters written on the 25th of December, 2019 on the alleged Failure of The Hon. Minister of Humanitarian Affairs to approve payments for school feeding in some states and Npower Stipends for October/November 2019.

Since the Honourable Minister of Humanitarian Affairs, Disaster Management and Social Development, Hajiya Sadiyya Farouq, assumed office, she has gone about handling the transition of the affairs of the Social Investment Programmes from the Presidency to the new Ministry, with the support of the programme administrators and the Cluster Heads.

During this period, she has had to receive briefings from the NSIO and the different clusters concerning the implementation and status of the programmes, successes and challenges.

Where she needs additional information, she has sought further clarification in a bid to ensure that the implementation process fulfil the intended mandates of the SIPs.

It should be noted that the former accounting Ministry, which is the ministry of Budget and National Planning has to put on hold all processes of payments after the presidential instruction of the movement of the SIP.

Hence, the necessary civil service procedures that needs to be set up in the new ministry and the briefings delayed payments for a bit.

However all issues and briefings and procedures has been resolved and payment has continued unhindered.

Regarding the delay in the stipends of N-Power volunteers for two months (October and November), the Honourable Minister, in a Press Conference on the 2nd of December 2019 explained the reason behind the delay, and also pledged that beneficiaries would receive their backlog payments on or before December 20th, 2019.

This was done. These actions clearly indicate that, contrary to what some media houses are putting out, the Honourable Minister is not acting in any inimical manner toward the Programme. She has cleared all requests that have to do with
payments of vendors and stipends that has reached her table.

We will present ‘the best material’ for president in 2023 —PDP

As Edo’s political crisis deepens, Oba of Benin calls for prayer and fasting ahead of 2020 guber election