Home » Politics » Wike accuses Amaechi of plotting to use military, police to disrupt polls in Rivers 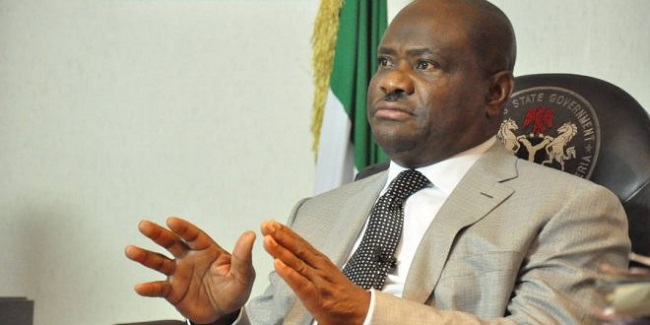 Governor of Rivers, Nyesom Wike, has accused the state’s former governor and current Minister of Transportation, Rotimi Amaechi, of plots to use some military and police personnel to disrupt elections in the oil rich state.

He said part of the alleged plot was to bomb offices of the Independent National Electoral Commission (INEC) in the state, destroy voting materials at registration area centres and disturb the peaceful conduct of the Saturday elections in the state.

Wike stated this in a state broadcast on Thursday, where he also declared Friday, February 15 as public holiday to allow Rivers people pray for God’s intervention to ensure peaceful elections in the state.

According to him, “Credible intelligence has linked Rotimi Amaechi and his cohorts in the factionalised APC with plans to prevent the peaceful conduct of the general elections in Rivers State with the support of some unpatriotic military and police officers.”

According to the governor, a number of Hilux vehicles painted in military colours and gunboats donated by a top official of Nigeria Ports Authority (NPA) had been handed over to the militants to carry out the attacks across the state.

Amaechi had during President Muhammadu Buhari’s presidential campaign earlier on Tuesday, sang war songs and asked supporters of the All Progressives Congress (APC) to get ready for the Saturday’s election in the state.

Wike in his broadcast expressed worry over what he tagged needless threats of violence by the Director General of the APC Presidential Campaign Council.

According to him, Amaechi should accept the fate of Rivers APC because his “arrogance and refusal to follow due process” caused the crisis in the state party.

“It is therefore most unfortunate that instead of using internal party mechanisms to settle the festering crisis before it was too late, Rotimi Amaechi chose to act with impunity and is now hunted by the unpleasant outcomes of his arrogance and disdain for due process.

“Even at that, the Supreme Court has spoken and the only rational path left for Rotimi Amaechi is to recognise the fact that justice has prevailed over impunity.”

Meanwhile, Amaechi is reported to have reacted to Wike’s allegation against him, describing it as false.

He was quoted as saying, “I joined politics 33 years ago, let one politician either at the national or state level say he attended a meeting with Amaechi where I discussed about hiring thugs.”

Amaechi was said to have accused the chairman of INEC, Professor Mahmud Yakubu, of having part in APC fate in Rivers because he wants to ensure Wike gets a second term in office.

He based his allegation on the fact that Yakubu was the Director of TETFUND when Wike was the Minister of State for Education.

READ ALSO: I hope to remain friends with Atiku after we send him into retirement on Feb 16- Tinubu

“INEC is always working for the PDP. For example, there is a stay of execution granted by the Court of Appeal in Port Harcourt, just because the INEC chairman was a director of TETFUND when Wike was the minister, he has refused to implement the judgment.”

The issue in Rivers State stem from court rulings up to the Supreme Court, which barred APC from fielding candidates from the states in any elective position in the 2019 general elections.

The court rulings were sequel to irregularities that marred the party’s primary elections in the state.