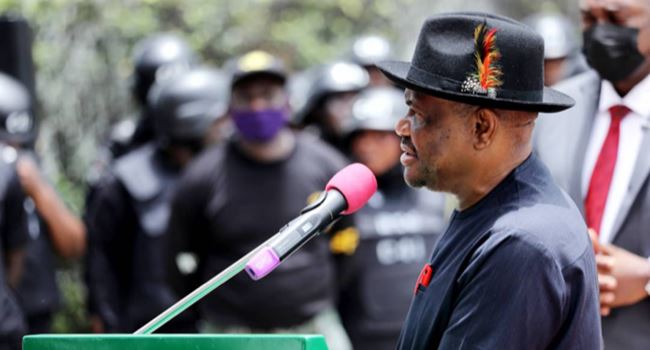 Wike made this call via a statement issued by his Special Assistant on Media, Kelvin Ebiri

According to the statement, the Rivers State Government purchased the helicopters worth over $10m and handed them over to the Nigerian Air Force to tackle insecurity in the state.

“Governor Wike, has therefore, warned that the state will not hesitate to withdraw the gunboats it is about to present to the Army, Navy and Police, if they are deployed for use in other states,” the statement reads.

Wike spoke Thursday while presenting 29 operational vehicles to the Nigeria Police at the re-launch of the Rivers State security outfit code named, C.4.I at the Government House, Port Harcourt.

He explained that his administration had continually demonstrated its resolve to rid the state of criminality through provision of operational vehicles, gunboats and other support for security agencies.

He, however, expressed disappointment that some of the equipment provided by the state government to support security agencies in the fight against crime were often diverted to other states of the country to the detriment of Rivers State.

“The Nigerian Air Force should know that the Rivers State government gave them two armoured helicopters. The former Chief of Air Staff never wrote to thank us.

“Which state has done that for Nigerian Air Force in this country? Even while he was former Chief of Air Staff, he never thanked us, but he was using our armoured helicopter.”