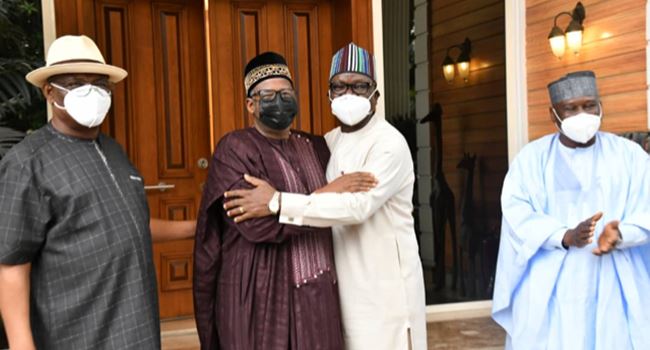 The Governor of Rivers State, Nyesom Wike, and his Adamawa counterpart, Ahmed Fintiri have reconciled the feuding governors of Benue and Bauchi States, Samuel Ortom and Bala Mohammed, following their recent spat over arms bearing by the Fulani herdsmen.

Ortom and Mohammed have been engaged in a war of words after the Bauchi governor lent his support to Fulani herdsmen carrying AK-47 rifles, saying they had to protect themselves from cattle hustlers.

While reacting to the comment, Ortom, had, during a press conference in Makurdi, slammed Mohammed, saying he (Mohammed) was one of the ‘terrorists terrorising Nigeria.’

However, the brewing conflict was resolved following the intervention of Wike and Fintiri at a meeting in Port Harcourt on Tuesday convened by Wike.

During the meeting which held at Wike’s private residence at Rumuepirikom, the Rivers governor said he called the meeting in the interest of peace and to find a way forward for the Peoples Democratic Party (PDP) which they all belong to.

Mohammed who responded to the gesture, said the outburst between him and Ortom over the profiling of Fulani herdsmen was highly regrettable.

“We don’t mean to divide the country, to divide our people. We are still friends and brothers and we will move forward because most of those issues are fully resolved.

“I want to seize this opportunity to tell Nigerians that whatever misconception that is there, that me and my brother Ortom are having problem or anybody in Nigeria is not true.

“What happened between me and Ortom was just an explanation that emanated from a larger Governors’ Forum that we spoke on the security of the nation and we talked of the failure of security infrastructure which everybody knows is under the purview of the federal government.”

On his part, Ortom said the fued between him and Mohammed has long been settled.

“Gov. Bala Mohammed is my brother and the little misunderstanding we had has been resolved.

“I want to thank Gov. Wike and Gov. Fintiri for calling this peace meeting which is also an opportunity for us to chart the way forward for our great party.

“It was wrong for us to engage in such public outburst but I want to assure Nigerians that it is all over,” he said.

No fly-zone will not stop banditry in Zamfara —Gov Matawalle