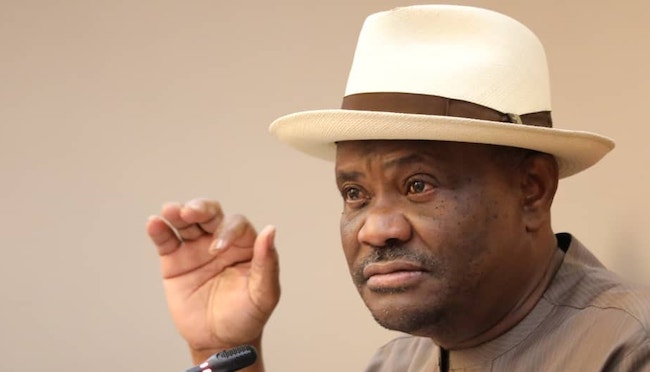 The Rivers State Governor, Nyesom Wike, declared on Thursday he would remain in the Peoples Democratic Party (PDP) and fight for its survival.

The governor stated this when he met with PDP stakeholders in Rivers State at the Government House, Port Harcourt.

Wike vowed that he would stay back to fight for the enthronement of unity, equity, and peace in the party.

He also described as unacceptable the decision of the PDP National Chairman, Iyorchia Ayu, to cling to the position despite the growing demand for his resignation by party members.

Some members of the PDP loyal to the Rivers State governor had during a meeting on Wednesday announced their withdrawal from the party’s presidential campaign council over Ayu’s refusal to vacate the chairmanship seat.

The party has been enmeshed in a protracted crisis since the conclusion of its presidential primary on May 28.

At the meeting, the governor asked the PDP members to respect the provision of the party’s constitution on the zoning of offices.

He said the PDP campaign team in Rivers State would be unveiled and the campaign pattern adopted next week.

“They are telling you they told the chairman of the BOT to resign. So you know there is a problem. You said he should go and resign.

“You can put pressure on him to resign when his tenure hasn’t come to an end. But you cannot put pressure on the chairman to resign. You think at our level you will deceive us. You will tell us stories.

“Let me state this clearly, if anybody is thinking or doing anything to think that we will leave PDP, foul.

“We will do the fight in the party. We are not like them when in 2014 they walked out of Eagle Square. They’ve forgotten. They walked out and joined APC. Is it not correct?

“Did they remain to fight inside the party? But we remained, they ran away. Now, there is a fight in the party, we will not run.”