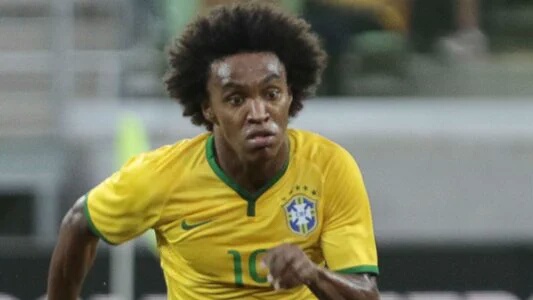 Chelsea forward, Willian has been invited to join Brazil’s Copa America squad as a replacement for Neymar, who was ruled out by injury.

Neymar’s hopes of shinning at the continental showpiece were ruined after he suffered an ankle injury during his team’s international friendly 2-0 victory over Qatar on Wednesday.

The Paris-Saint Germain star will now return to France, for Women’s World Cup duties, before continuing treatment on his injury at his club.

And, while Lucas Moura of Tottenham and Real Madrid’s Vinicius Junior had been mentioned as replacements, Blues winger Willian has ultimately received the nod.

“The attacker Willian, of Chelsea, has been called up by the Brazil national team and will play the 2019 Brazil Copa America,” the Brazilian Football Confederation confirmed in a statement released on Friday.

“He has been called to replace Neymar, who was dropped from the squad following the friendly against Qatar.”

Willian will now have to return to his native Brazil from vacation in Israel, after missing out on Tite’s original 23-man call-up.

Willian made his debut for Brazil in November 2011 and has gone on to make 65 appearances in the Selecao, scoring eight goals.

Brazil will kick off their Copa America campaign in Group A on Friday June 14 against Bolivia, before going on to face Venezuela and Peru in the tournament’s opening phase.