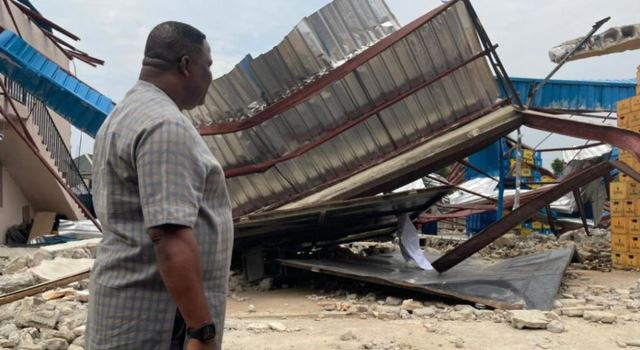 A windstorm that happened in the Umuejem community in the Owerri West Local Government Area of Imo State, has killed a middle-aged man and left three others critically injured.

The casualty figure was confirmed by officials of the National Emergency Management Agency {NEMA), during an assessment of the community with journalists on Thursday led by the acting Head of the Imo-Abia Operations Office, Chidi Ogundu,

Ogundu said about 575 persons were displaced by the disaster, while no fewer than 35 houses and business premises were destroyed.

“We are conducting a joint assessment with other humanitarian agencies in Owerri to ascertain the level of damage caused by the windstorm.

“Residential buildings, churches, business premises, and critical infrastructure were destroyed, leaving a lot of people in agony,” he said.

He noted that as of the time of the assessment, one life was lost, while three persons sustained varying degrees of injury and were receiving treatment in a hospital,

Ogundu commiserated with the victims of the storm and promised to let relevant authorities know about the incident and their plight for possible assistance.