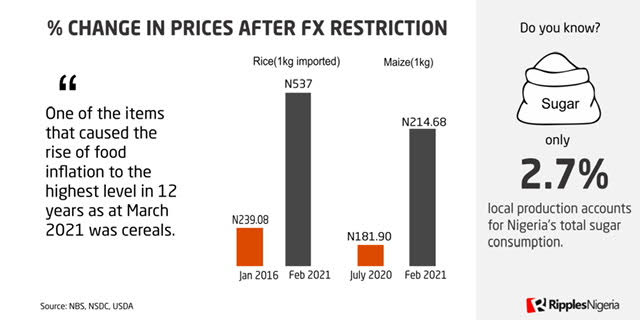 The Central Bank of Nigeria (CBN) said on Thursday, that it is considering adding sugar and wheat on its FX restriction list, pushing the total number of items on FX restrictions to 46.

A tweet which quoted the CBN governor Godwin Emefiele, added that Nigeria must now work together to produce sugar and wheat in the country rather than importing them.

What this means is that manufacturers who chose to import the items no longer qualify to get foreign exchange from the CBN or the official market but will have to source forex from the parallel market or Bureau De Change to pay for their imports which is more expensive.

This is despite the huge gap between local production and consumption.

Data crunched by Ripples Nigeria from the website of the Nigeria Sugar Development Council (NSDC) shows that in 2019, only 2.7 percent of sugar consumed in Nigeria was locally produced.

According to the data, 1.41 million tonnes of sugar was consumed in Nigeria in that year, but the country only produced 38,597 tonnes.

Although this indicates an increase of 158.7 percent from the previous year production level of 14,918 tonnes, Nigeria needed 1.36 million additional tones from importation consumption level.

Further analysis of NSDC data also showed in 2020, the country spent N433.4 billion importing 1.53 million tons of sugar but failed to give local production level which it said is still ongoing.

While one can understand the pressure the importation is putting on Nigeria’s foreign exchange reserves, the gap is a source of concern and the reason is not farfetched.

Not only is sugar one of the most important commodities for industrial and retail use, it is an important part of household food items.

Data for wheat another food item marked for FX restriction showed Nigeria is far from self-sufficiency, again raising eyebrows on why the move at this time.

According to the USDA data, out of 4319 tonnes of wheat consumed in Nigeria in 2020 only 60 tonnes were produced locally.

Wheat based foods are also very popular among Nigerians and what this means is that Nigeria’s food inflation which is already in the highest level in 12 years at 22.95 percent in March 2021, might be stretched further.

Take for instance, in July 2020, when CBN added Maize to the FX restricted list, data from National Bureau of Statistics selected food price showed that 1Kg Maize grain white sold loose priced at N190 in June 2020 has increased by 18.22 percent to 210.74 as at February 2021.

Similarly, 1kg Maize grain yellow sold loose also increased in price by 18.02 percent to N214.68 from N181.90 it sold in June before the restriction came into force.

In 2015 after CBN first released 41 items prohibited from being imported into Nigeria in which rice was included.

A survey by Ripples Nigeria showed in Lagos the cheapest imported rice now sells for N28,000 compared to 13,000 before the forex restriction and border closure.

In a reaction to CBN forex restriction on food items without adequate local production, Kalu Aja a financial analyst had once urged CBN to seek better options

He argued in his article titled, CBN, there is one option that’s better than forex ban, that CBN is better served by targeting subsidies to locally produced items and this he believes will eliminate food importation by make food cheaper in Nigeria.

Will the likes of Dangote and BUA group among others be able to shoulder the responsibility to provide the needed sugar and wheat to over 200 million Nigerians without extra burden to the already economically stretched Nigerians? Time will tell.