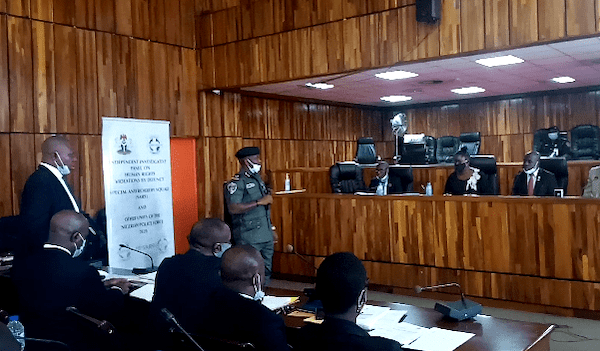 A witness, Abbah Onoja, on Wednesday narrated how a police detainee, Obinna Jonah was tortured to death while in police custody on the 28th of January, 2020.

Onoja, who was testifying before the panel probing cases of police brutality in Abuja, said the late Obinna Jonah was his co-detainee before he lost his life during police torture.

Onoja was called to testify in the case of alleged extra-judicial killing which was lodged before the panel by the deceased person’s brother, Okechukwu Jonah.

According to the witness, he was arrested along with his friend, Chizoba Samuel, at Anguwar Shehu, Karimo, Abuja on January 27, 2020, adding that the arrest took place at Samuel’s place, with the police accusing them of belonging to a cult called Supreme Vikings Confraternity.

He said Obinna was later arrested that same day, also on the allegation of being a cultist, adding that they were all detained at the police Anti-One Chance Unit in Jabi, Abuja.

According to Onoja, the unit, headed by DSP Jumbo Jumbo, later moved to Abbattoir, a police facility being occupied by the disbanded Special Anti-Robbery Squad and other tactical police units, where after being tortured by the police, Samuel confessed to belonging to the cult, and implicated the deceased, Obinna, to be a member.

He said Obinna, who was later brought to join them, also admitted to being a member after he was tortured.

Onoja said: “They asked for his firearms, but he denied having any.

“After much torture, it got to a point that he couldn’t talk anymore and started foaming in the mouth.”

Onoja further disclosed that a total of 14 of them arrested for allegedly being cultists, were later moved to the Abuja Police Command, adding that Obinna could not talk despite being hit repeatedly by an officer with a baton.

The witness further stated that they were all moved from there to SARS detention centre at Abattoir for further investigation.

“When we got there, one Corporal Abubakar asked Jumbo Jumbo in pidgin English what should be done with Obinna.

“Jumbo told him that he (Obinna) should be dropped.

“He was kept in a cell, but by the next morning, he was dead. The inmates were asked to bring his corpse out. That was on January 28, 2020.”

The witness also named other police officers involved in the case to include one Sergeant Gambo and one Sergeant Biggie.

The Chairman of the panel, Justice Suleiman Galadima, adjourned the matter till February 9, 2021 for the police defence team to cross-examine the petitioner and the two witnesses.