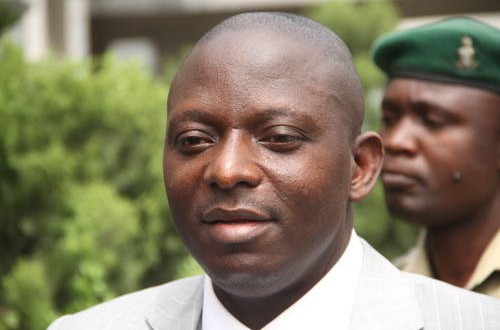 A prosecution witness, Ekene Charles, in the trial of Patrick Akpobolokemi, a former Director-General, Nigerian Maritime Administration and Safety Agency (NIMASA) on Monday, told the Lagos State High Court sitting in Ikeja, Lagos how he once kept about $2million in his house for Akpobolokemi.

The former NIMASA boss is being prosecuted for an alleged N687million fraud, before Justice Raliatu Adebiyi of

The money, belonging to NIMASA, had been released for the implementation of Voluntary International Maritime Organisation Member State Audit Scheme (VIMSAS).”

One of the counts reads: “That you, Patrick Ziadeke Akpobolokemi, Captain Ezekiel Bala Agaba and Vincent Udoye , between the 30th day of October, 2014 and the 6th day of May, 2015 in Lagos within the jurisdiction of this Honourable Court with a dishonest intent converted to your own use the sum of N346, 844, 680.00 (Three Hundred and Forty Six Million, Eight Hundred and Forty Four Thousand, Six Hundred and Eighty Naira) only property of the Nigerian Maritime Administration and Safety Agency (NIMASA) released to you for the implementation of Voluntary International Maritime Organisation Member State Audit Scheme (VIMSAS).”

The defendants, however, pleaded not guilty to the charges preferred against them.

In view of their pleas, the prosecution counsel, Rotimi Oyedepo, urged the court to allow him to present his witness, Charles, a Senior Administrative Officer with NIMASA, in the matter.

Giving his testimony, Charles, who worked as Personal Assistant to Agaba, revealed to the court that Akpobolokemi, in 2014, set up a Committee on VIMSAS and made Agaba the Chairman of the Committee.

He said Committee members included staff from various departments in NIMASA, stakeholders and consultants from outside the Agency. “After the Committee was set up, an account was opened for VIMSAS with Zenith Bank and I was asked by the Chairman of the Committee to draw up budgets. Also, various sub-committees came up with their budgets,” he said.

The witness further told the court that two budgets were approved for the Committee for VIMSAS and funds were released to the Committee’s account after the budgets had been forwarded to the National Security Adviser for approval.

According to him, “The first budget put together by me as directed by the Committee Chairman requesting funds for VIMSAS was N318million , which was supposed to be the only budget for the VIMSAS. But another budget was prepared and approved for the sum of N498.2million.

In his further testimony, the witness said after the release of the funds, N120million was paid to Aroward Nigeria Limited, which did not render any service neither to VIMSAS nor the Committee.

Charles also told the court that several millions of Naira were paid into accounts of some individual companies that did not have any transaction either with VIMSAS or NIMASA.

“I know this much because I was the only one who went to bank with the instruments in which these monies were withdrawn, transferred and paid into the companies belonging to individuals for personal use.

“There was even a time when I had almost $2 million in my house belonging to Captain Ezekiel Bala Agaba and he told me that the money belonged to Patrick Akpobolokemi.

“And each time I gave Captain Agaba money in the office, we normally take it to Patrick Akpobolokemi’s office together. I was the one who took the instrument to the bank with which Capt. Agaba bought shares worth N3million from Access Bank.”

As the proceedings went further, the first defendant, Akpobolokemi, complained that he was not feeling too comfortable, that he (Akpobolokemi) was suffering from diarrhea.

Consequently, Justice Adebiyi adjourned the matter to November 30, 2018 for continuation of trial on the request of the first defendant to seek medical attention.