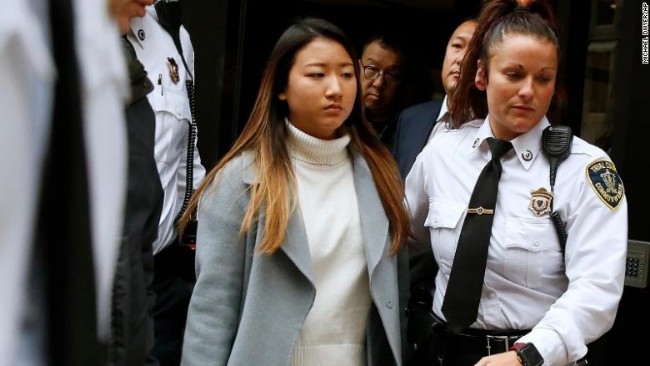 A 23-year-old woman, Inyoung You, has pleaded guilty and accepted responsibility for ‘pushing’ her boyfriend to commit suicide in 2019, after sending him abusive text messages.

You, a former Boston student, pleaded guilty to manslaughter on Thursday after repeatedly telling her boyfriend, Alexander Urtula, to kill himself, which he went on to do, while they were students at Boston College.

You had originally pleaded not guilty in 2019 but under the new plea agreement, she received a suspended sentence which stipulates that if she violates any of her probation terms over the next 10 years, she could serve two and a half years in jail.

Among the terms of the agreement are that she will undergo mental health treatment and do community service. In addition, she may not profit from any portrayal of the case over the next 10 years.

“This agreement with defense counsel was made in close consultation with the Urtula family. It is consistent with their desire to seek accountability and closure and to protect the legacy of Alexander, a loving son, brother, and uncle.

“They believe this is something Alexander would have wanted ” Suffolk County District Attorney Rachael Rollins said in a statement.

During the hearing, prosecutors alleged that You became abusive toward Urtula in late summer 2018 after she found out he lied about meeting with his ex-girlfriend.

Throughout You and Urtula’s 18-month relationship, You reportedly sent many abusive texts to Urtula, often telling him to die by suicide.

“Do everyone a favor and go fucking kill yourself, you’re such a fucking stupid ass worthless shit,” You allegedly texted the then 22-year-old Urtula on several occasions in 2019.

Urtula committed suicide on May 20, 2019, by jumping from a high rise building just hours before his college graduation. You was said to be tracking his phone on the morning Urtula died and was present at the time of his death.

Prosecutors argued that You failed to stop her boyfriend even though she knew where he was and what he was going to do. They argued this made her “criminally responsible” for his suicide.

Over 30 people, including women, children killed, bodies burned in Myanmar