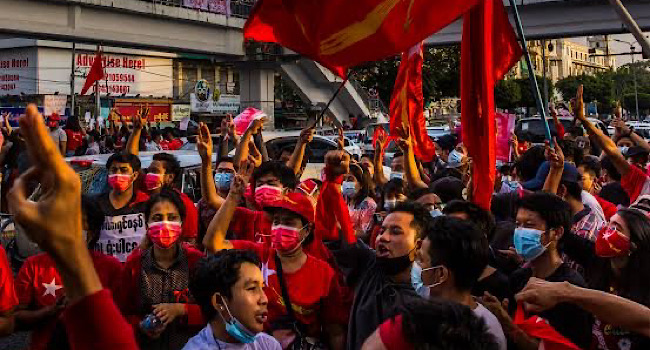 A woman who was shot in the head by police during protests in Myanmar last week has died, becoming the first protest fatality since the country’s military took control in a coup two weeks ago.

The 20-year-old grocery store worker, Mya Thwate Thwate Khaing, had been on life support since being taken to hospital on February 9 after she was hit by what doctors said was a live bullet at a protest in the capital, Naypyitaw.

A hospital official confirmed Khaing passed on at about 11am on Friday and her body would be examined later today because “this is a case of injustice.”

“We will keep the cause of death on record and send a copy to the respective authorities. We will look for justice and move forward,” the official said.

The shooting of the grocery store worker happened while police were clearing crowds and roused anger across the nation, prompting a mass rally in support of the movement, many of whose members say they refuse to allow another generation to experience military rule.

The police said their biggest effort to block the protests downtown, sealing off of the main focal points near Sule Pagoda after a huge rally at the major intersection the previous day stopped traffic in the area.

Protesters gathered on all four sides of the blocked-off area, with some crowds growing to more than 2,000 strong. Barricades remain outside City Hall, where Buddhists were heard chanting at the police, and nearby, a protest began outside Myanmar Economic Bank while opposite the bank, three truckloads of Tatmadaw soldiers were seen parked down a narrow road.

“The police are afraid of us,” said a protest organiser draped in a rainbow flag near Sule Pagoda. “They don’t want us to gather and chant, but we will continue peacefully.”

Myanmar’s army seized power on February 1 and detained elected leader Aung San Suu Kyi, ending a long transition towards democracy and bringing tens of thousands of demonstrators onto the streets.

Earlier, Khaing’s brother, Ye Htut Aung, had told Reuters the family, though supportive of the protests, had urged her against going to the demonstration for fear of violence.

However, she insisted it was in her spirit to join the protests and the family could not stop her.

“I feel really sad and have nothing to say,” Aung said when her death was announced.

Aung said he warned his sister to stay at the back of the protest and that the police were not to be trusted but she refused and said the police would not shoot at the protesters.

At the time of the shooting, the army’s True News Information Unit said security forces used only non-lethal weapons and that the police were investigating.

The shooting prompted protesters to drape a massive a portrait of her from a bridge in downtown Yangon, the commercial capital, with the words:

“Let’s together oppose the dictator who kills the people.”