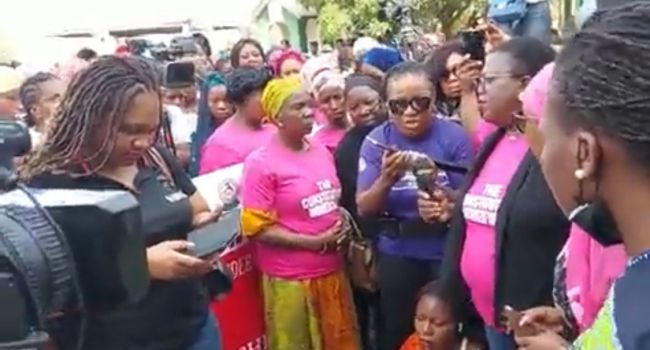 A number of civil society groups made up mostly of women on Wednesday blocked the entrance to the National Assembly, Abuja in protest against it how lawmakers voted against a bill that would have created special seats at the National and State Houses of Assembly for women.

At the entrance of the federal legislative premises, the women called different lawmakers to know how they voted.

The protest was to register their displeasure over the rejection of gender equality bill by the lawmakers during the review of the constitution on Tuesday.

The women had, during a virtual press conference on Tuesday night, vowed to occupy the National Assembly from Wednesday over the decision of lawmakers to vote against a bill seeking to create special seats for women in federal and state assemblies.

At exactly 8am on Wednesday, the women groups made their way to the Assembly complex but were stopped at the gate by the police operatives who barred them from gaining access into the premises of the NASS.

At the virtual press conference held which was attended by over 200 civil organizations and the media, one of its coordinators, Dr. Abiola Akiyode-Afolabi, had said the women would not back down until all gender bills in the constitution amendment exercise are reconsidered by the National Assembly.

Akiyode-Afolabi, the Founding Director of Women Advocates Research & Documentation Centre, said the women would “demand an urgent meeting with the leadership of the National Assembly for them to reconsider the the gender bills.”

She continued, that “Nigerian women have vowed to occupy the National Assembly beginning 8am on Wednesday,

“We will also be using the following hashtags to push the demands on social media: #NigerianWomenOccupyNASS;
#BreakPoliticalBias;
#BreakConstitutionBias,” she said.

Describing what happened at the National Assembly on Tuesday where the lawmakers rejected the bill as a sad moment for Nigerian women, Akiyode-Afolabi, stressed that women will no longer take the discrimination against them lying low.

“We will no longer take the discrimination of Nigerian women lying low. Enough is enough.

“The protest will also take place across the various states of the federation but our meeting with the leadership of the National Assembly on Wednesday will determine the shape of what will happen at the state levels.

Related Topics:#featuredLawmakersNational Assembly
Up Next

IPOB warns Cubana chief priest, speaks on youths who got smartphones from Uzodinma