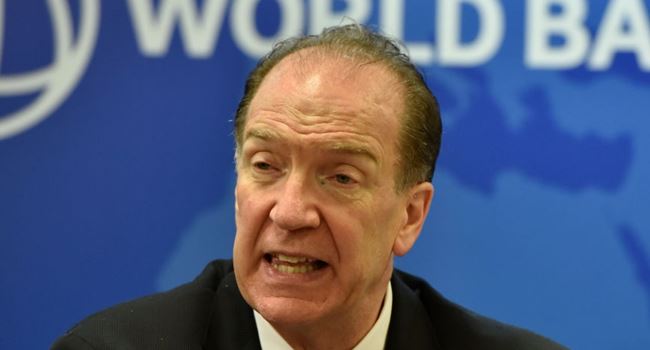 Six developmental initiatives estimated at $2.19 billion (N796 billion) were Wednesday unveiled by the World Bank Group, largely targeted at handing Nigeria’s rural poor a lifeline from poverty and deliver them to modest comfort.

David Malpass, the lender’s President, speaking in Washington, noted that “Nigeria is central to the World Bank Group’s mission of tackling extreme poverty.

“The World Bank is carefully targeting its support on high impact projects as the country works to tackle corruption and lift 100 million of its people out of poverty.”

A little over three weeks back, in its report: Advancing Social Protection in a Dynamic Nigeria, the World Bank had declared that Nigeria’s benighted north was responsible for 87% of Nigeria’s rural population in 2016.

The report spotlights the insurgency-torn North West as a spot particularly vulnerable to rural poverty on account of cycles of Boko Haram’s mortal raids on the region, which has not only led to massive casualties but left survivors devastated.

That is not to mention economic value of the ruin to possessions, houses and infrastructures that happened since the menace launched.

And there are many other sobering statistics the report presents on myriad other impoverishing factors, ranging from unemployment, underemployment and employment in low-productivity jobs to income inequality, conflict and climate change.

The bank’s intervention program is comprised of the following projects:

This is a fair estimate considering that the national poverty rate escalated from 38.8 per cent from 2011 to 2016 and that rate must have gained momentum between 2016 and now in the light greater Boko Haram attacks in the turbulent North East, skyrocketing inflation rate and worsening unemployment level.

Statistics show that the global benchmark for poverty is $1.90 per day, meaning that the entire World Bank’s $2.19 billion largesse to Nigeria would take less than 23 days to feed Nigeria’s rural population only if the entire aid were to be committed to that purpose alone.

It is puzzling that the Nigerian Government has not stopped being a beggar on the doorstep of the rich.

About a decade and a half ago, Nigeria was all over the West, begging passionately for a debt relief through the Paris Club.

The Nigerian Government has grovelled to countries abroad on several occasions years after in order to obtain financial offer.

It is imperative for the nation to grow up and wean itself off a life of dependency by taking its infrastructural transformation programme further, contriving friendly fiscal policies and  designing economic expansion programmes that will drive real growth.

In the same vein, government is duty-bound to raise the the standard of living of the most vulnerable Nigerians and provide economic buffers to its citizenry these hard times.