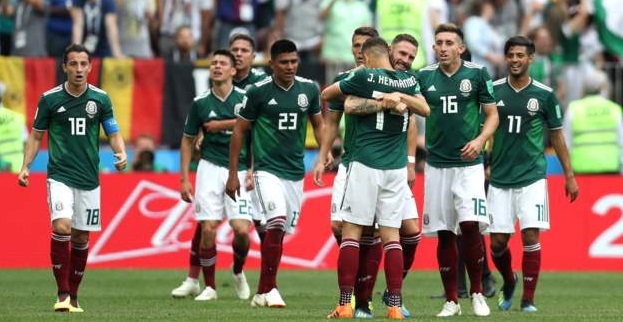 Defending champions Germany were beaten 1-0 by Mexico in the opening game of Group F at the 2018 FIFA World Cup in Luzhniki Stadium, Russia on Sunday afternoon.

They become the third consecutive defending champions to lose their opening match at the mundial, following Italy in 2010 and Spain in 2014.

An impressive Mexico side successfully recorded the first shock win of this year’s World Cup as they earned the deserved victory over the lacklustre holders.

A 35th- minute strike by Hirving Lozano, after he cut inside Arsenal’s Mesut Ozil and firing low past goalkeeper Manuel Neuer, ensured the Mexicans kicked off their campaign on a bright note.

The Germans did lose their first game of the World Cup for first time since 1982. They made efforts to come back into the game, but Toni Kroos, Joshua Kimmich and Timo Werner all had their chances off the post.

Match winner Luzano, who plays for PSV Eindhoven, was crowned the man of the match. After the game, he said: “Thank God it was a great result for the team and to get this (man of the match award) means a lot to me.

“I would have to agree it is the best goal I have scored in my life. We all dream of playing in the World Cup.”

Meanwhile, history was made when Mexico’s 39-year-old defender Rafael Marquez came on in the second half to become the third player to have played in five successive World Cups – after Germany’s Lothar Matthaus and Mexico’s Antonio Carbajal.

The other game of the Group will take place on Monday, between Sweden and South Korea at the Nizhny Novgorod Stadium.