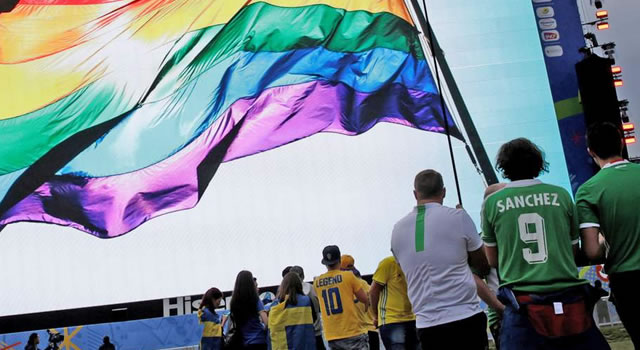 There are growing concerns among rights groups over the rise in homophobia and the safety of homosexual fans in the socially conservative European nation, Russia which is hosting the 2018 World Cup.

According to an English football fan identified as Cunningham, who will be attending England’s first match against Tunisia on Monday in Volgograd, her alliance of LGBT football fan groups has received threatening anonymous emails, warning that they would be “stabbed” if they made the trip to Russia.

Read also: 2,000 children separated from their parents at US-Mexico border

“We have received several warnings that LGBT fans will not be welcome in Russia and some were quite drastic in terms of what would happen to us if we did go,” said Cunningham, organiser of Three Lions Pride, an LGBT football fan group of England supporters, adding that it was “unfortunate” that FIFA is holding such a prestigious football tournament in a country where “some people are unwelcomed”.

The concerns are coming hours after citizens of the United States of America and the United Kingdom have been warned by their various embassies to be wary of possible terrorist attacks in Russia.

Reports say both countries have warned their citizens against travelling to Russia for the World Cup with the US placing the host country’s terrorism threat alert at “level 3”.