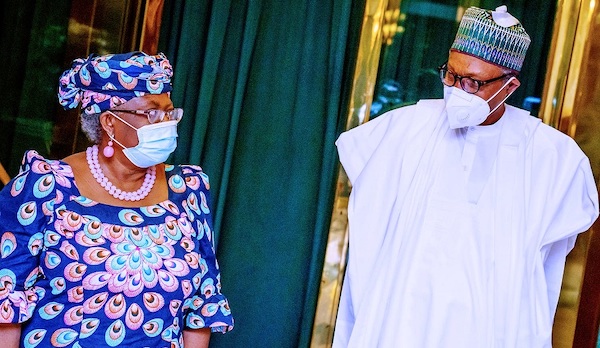 The Federal Government on Thursday reaffirmed its commitment to ensuring that Nigeria’s former Minister of Finance, Dr. Ngozi Okonjo-Iweala, emerges the new Director-General of the World Trade Organisation (WHO)

At least 106 member countries of the WTO had declared their support for the former World Bank managing director.

But the United States on Wednesday rejected Okonjo-Iweala as consensus candidate for the post which was vacated in August by the Brazilian diplomat, Roberto Avezedo.

The Ministry of Foreign Affairs reaffirmed the government’s commitment to the ongoing efforts at ensuring the country candidate’s success in the selection process in a statement issued by its spokesman, Ferdinand Nwonye, in Abuja.

The ministry noted that Okonjo-Iweala had secured the support of the majority of the WTO members with only the US opposing her.

It added that the General Council of the WTO has been scheduled for November 9 for the final decision on the selection process.

The statement read: “Nigeria will continue to engage relevant stakeholders to ensure that the lofty aspiration of her candidate to lead the World Trade Organisation is realized.

“The Ministry of Foreign Affairs wishes to inform that the third and final round of the selection process of the Director-General of the World Trade Organization was concluded on Tuesday, October 27, 2020, and the result was formally announced on Wednesday, October 28, 2020.

“The candidate from Nigeria, Dr. Ngozi Okonjo-Iweala has secured the support of the majority of the member countries but is yet to be declared and returned the winner.

“This is because apart from winning the election, all the 164 Member States of WTO were expected to adopt the winner by consensus, in accordance with the rule of procedure of the WTO.

“It is important to highlight that Dr. Okonjo-Iweala has secured cross-regional backing with only the United States opposing the consensus.”