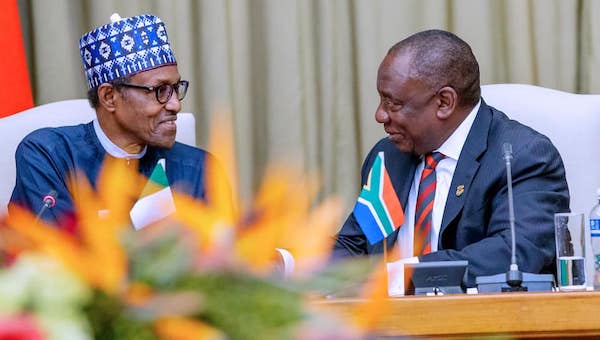 This is coming weeks after a wave of violence against Nigerian nationals in Johannesburg and Pretoria strained relations between Africa’s top two economies.

The presidents, at the end of Buahri’s two-day visit, said they regretted the violence and subsequent retaliation in Nigeria against South African businesses, pledging instead to deepen trade ties.

“As the government of South Africa, we have expressed our deep regret at the attacks directed at foreign nationals and our condemnation of all forms of intolerance and acts of violence,” Ramaphosa told reporters.

Ramaphosa said the two countries had 32 bilateral agreements and memoranda of understanding, covering trade and industry, science and technology, defence, agriculture and energy.

Nigeria accounts for 64 per cent of South Africa’s total trade with the West African sub-Region and is one of its largest trading partners on the continent.

Buhari, on his part, said beyond the economic partnership, the anti-foreigner violence had to be addressed quickly.

“We decided to take concrete measures to prevent the recurrence of such unacceptable incidents in the future,” he added.