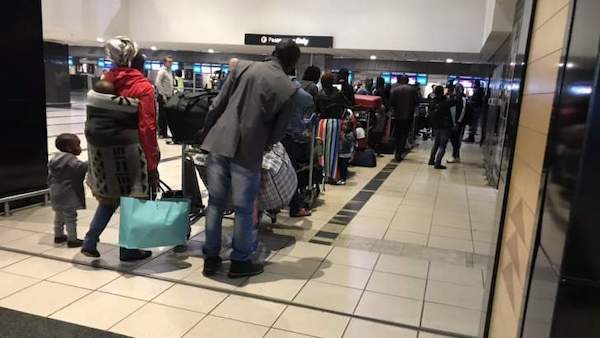 135 out of the Nigerians who had registered to return home over the xenophobic attacks on them in South Africa have been arrested by the security agents of the country.

The Nigerians had already been profiled for evacuation out of the country before they were reportedly arrested by the security agents for not possessing travel documents.

It was gathered that the South African officials showed up at the last minute when the Nigerian citizens were already positioned to start boarding the Air Peace aircraft.

The aircraft was parked at the tarmac of the Oliver Tambo international airport on Wednesday when the South African officials effected the arrests.

The South African officials were said to have demanded the travel documents of the Nigerians and an explanation on how they came into South Africa without legal travel papers.

While only 182 of the 317 Nigerians had been documented with their names on the flight manifest, the remaining 135 who are said to have been prevented from boarding the free flight were taken away by the South African immigration officials.

Scores of journalists including those from foreign and local media organisations were waiting for the outcome of the development, but as at press time, no concrete news about when the Nigerians will be allowed to be flown back.

Meanwhile, the Air Peace airline is losing millions as its Boeing 777-200 plane deployed for the special flight continues to remain on the ground at the foreign country.