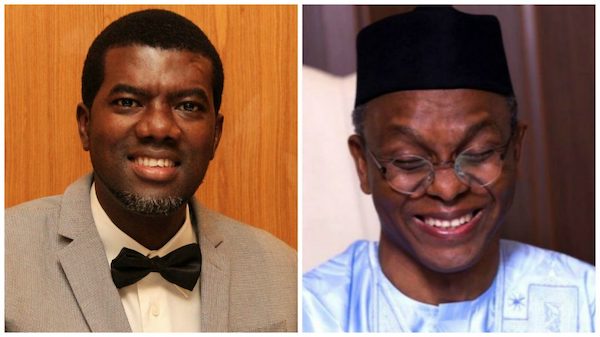 Following a comment credited to Kaduna State Governor, Nasir El-Rufai, where he said northerners should be proud for not being known for being convicted for “419 or being a Yahoo boy” (internet fraudster), a former aide to former president Goodluck Jonathan, Reno Omokri has fired back, saying his (El-rufai’s) region produced late Sani Abacha whom he claims is the biggest thief in the world.

Recall that El-rufai while speaking at the Northern Youth summit organized by Northern Hibiscus Initiative in Kaduna last Saturday, had said, “We still have a lot to be proud of.

“We are generally considered to be more honest and less corrupt than other Nigerians. That is something we should be proud of.”

But in a swift response, Omokri told the governor to cover his face in shame, especially as his region leads the world record in looting, stealing and other crimes that were perpetrated by late Gen. Sani Abacha.

His words: “In response to the above comments, I say to Nasir El-Rufai that before you label Southerners as Yahoo Yahoo people and fraudsters, do note that the biggest thief in world history is Sani Abacha. Yet, a stadium is proudly named after him in Kano.

“This is a man who stole in excess of $5 billion. 21 years after his death, Abacha is still sending credit alert to Nigeria, though General Buhari said ‘Abacha never stole’.

“Finally, let me conclude by saying before you label Southerners as corrupt and fraudulent people, note that both you and General Buhari campaigned for the re-election of a man shown on video stuffing bribes in his babanriga.

“It is left to Nigerians to decide in which category you, Nasir El-Rufai, a man who paid herdsmen after they killed his people, fall.

“I know that you are still smarting from the RUGA rejection , but that please, do not take out your anger on the long suffering people of Nigeria”.