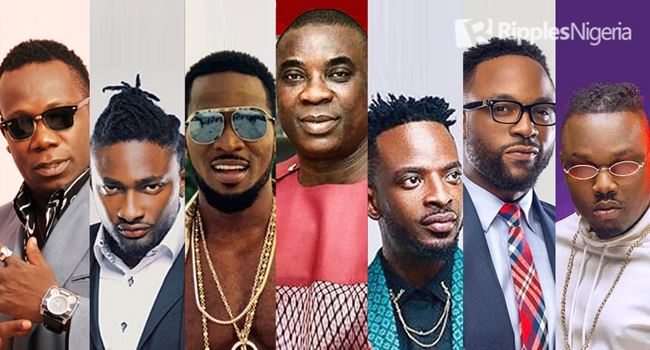 Celebrity scandals are never in short supply among Nigerian socialites. The year 2020 kicked off with so much promise and excitement in the local entertainment industry, but was soon rocked by the outbreak of the COVID-19 pandemic which forced ‘a new normal’.

However, some of the major players on the scene were caught up with ‘unwanted’ indignities. Enjoy this ten celebrity scandals that made the headlines in year 2020.

In what was recorded as the first celebrity scandal of the year 2020, the marriage of ‘Something About You’ crooner, Dr Sid to his now estranged wife, Simi Esiri was confirmed in the month of February after weeks of self-denials and unconfirmed reports.

The split was confirmed by Simi (an entrepreneur who doubles as the editor-in-chief of Schick magazine) who also revealed at the time that they were both in the process of officially ending their five-year union.

Simi who issued a statement on her official Instagram page added that both of them would be co-parents to their two daughters after divorce and also denied reports that she was violent towards her husband while they were married and that she stopped him from seeing their two daughters, Sydney and Sarah.

‘Kukere’ crooner, Iyanya Mbuk pleaded not guilty in the month of February before the Igbosere High court in Lagos to car theft charges leveled against him by the Police Special Fraud Unit (PSFU) Ikoyi.

Iyanya appeared before the court presided over by Justice Okikiolu-Ighile with his charge sheet stating that he allegedly dishonestly converted to his use or of another person, a Black Toyota Land Cruiser Prado Sports Utility Vehicle (SUV) marked MAVINIY, with Chassis and Engine numbers JTEBX7FJ7EK165480 and 2TR1385954.

The prosecution counsel, Mr. Chukwu Agwu, a Superintendent of Police (SP), who informed that the SUV in question is said to belong to ‘The Temple Management Company Ltd. alleged that Iyanya committed the offence sometime in September 2018.

Popular music producer, Clarence Peter was detained in the year 2020 over the death of video vixen, Love Divine, a.k.a. Picture Kodak, who was reportedly electrocuted in a studio located in his apartment.

Clarence Peters who was later released on bail alongside members of his production crew said that immediately Picture Kodak collapsed from the electrocution; she was rushed to a hospital but was rejected twice.

The producer who denied having a hand in the death of Picture Kodak also revealed that it was at the third hospital she was pronounced dead hours after she was electrocuted in the studio.

The Nollywood actor was caught up in a rape allegation scandal when a Twitter user identified as Kambili Korie (@KambiliKorie) accused him of raping her sometime in the year 2017.

Korie who also accused Uti Nwachukwu of being a bisexual went further to share a screenshot of a message from her device saved with the name “Uti 2” where he (Uti) allegedly apologised for forcefully having his way with her.

The accusation forced Uti Nwachukwu to file a petition before the Inspector General of Police, which was lodged through the chambers of his counsel Johnmary C. Jideobi & Co against the Twitter user.

The TV personality and winner of the fifth edition of the Big Brother Africa (BBA) reality TV show also threatened to drag his accuser to court if she does not provide concrete evidence to prove her claim.

‘Gongo Aso’ crooner, Abolore Akande aka 9ice was in the eye of the storm over alleged infidelity when a blog, Gistlover, posted a video of him kissing an unidentified woman- an incident which infuriated his wife.

The singer was forced to beg his spouse after admitting that he made a terrible mistake by kissing the unidentified woman in the viral video posted by the blog adding that he had done something so shameful, and terrible.

9ice, who has had two failed marriages, further urged Nigerians to help him beg the woman whom he married about one year ago to avoid another marriage collapse in less than two years.

Controversial Nollywood actress, Rahama Sadau stirred the hornets nest when she was charged with blasphemy and was ordered to appear before a Sharia court in Kaduna, for sharing what was considered as raunchy and racy photos on social media, an act seen as being against the tenets of Islam.

For uploading the raunchy pictures on her social media handles, the thespian was also suspended by northern filmmakers under the aegis of Motion Picture Practitioners Association of Nigeria (MOPPAN).

Rahama was also forced to shelve a trip to Dubai and made a detour to Kaduna to honour an invitation by the Nigeria Police Force, which claimed that the photos shared on social media by the actress had triggered blasphemous comments.

In what seemed like the longest scandal in the year 2020, Afro-pop singer, Dapo Oyebanjo aka D’banj was accused of alleged rape by a twitter user by the name of Miss Seyitan Babatayo, who claimed that the singer had forceful intercourse with her.

The accusation forced the ‘Koko Master’ to file a N1.5 billion libel suit filed through his lawyer Mike Ozekhome (SAN), against Ms Babatayo Seyitan who accused him of having unsolicited carnal knowledge with her.

However, D’Banj was later cleared of the rape allegations leveled against him by Miss Seyitan Babatayo in a statement by Umar Sanda, the Deputy Commissioner of Police (DCP) on behalf of Deputy Inspector-General of Police, Force Criminal Investigations Department, Force Headquarters.

In the statement, Umar said that the investigations unit of the police did not find any substantial evidence to prove that D’banj committed the act, and that Ms Seyitan had withdrawn the petition filed against the singer.

Fuji maestro, Wasiu Anifowoshe Ayinde Marshall (KWAM 1), who now prefers to be called K1 De Ultimate, months ago, was forced to deny claims that he was having an affair with Olori Ajoke, one of the wives of Alayeluwa, the Alaafin of Oyo State.

At the time, there were claims that the Alafin of Oyo, Oba Lamidi Adeyemi III, had sent Ajoke (the youngest of Alaafin of Oyo’s wives) packing from the palace over an alleged affair with the popular singer.

The report was fuelled by Chirp Television on Twitter which alleged that Badirat Ajoke cheated on her husband with Kwam 1, which spurred the Alaafin of Oyo to chase her out of his palace.

However, K1 De Ultimate denied the allegations saying the rumour was a lie concocted from the pit of hell by those whose aim was to drag his name to the mud adding that the rumour was the handiwork of agents of Lucifer who have continued in their warped delusions to see him go aground just for being conferred with the title of Mayegun of Yoruba land.

Self-acclaimed ‘Port Harcourt First Son’, Duncan Mighty raised eyebrows when he accused his wife, Vivian and her family members of plotting to take his life by poisoning him and thereafter, take possession of his property.

Duncan Mighty who raised the alarm in a post on his Instagram page said that his wife confessed to him that she connived with her mother and siblings to purchase voodoo charms to harm him.

He also went ahead to reveal on social media that his wife and members of her family took it farther by consulting native doctors adding that he had evidence of her confession.

Former Aviation Minister, Femi Fani-Kayode sent tongues wagging when he denied ever physically abusing his estranged wife, Precious Chikwendu, while reacting to a viral video that suggested he abused her.

In his reply, the chieftain of the Poeples Democratic Party (PDP) decided to drop the bombshell when he revealed that he caught the mother of his children in bed with a married man.

Fani-Kayode insisted that there was no physical abuse, adding that he collected the phone from Precious (a former Miss United Nations (World) 2014 Model) to stop her from recording him and also accused her of indulging in scandal after scandal.

R*pe cases on the rise in Yobe —Police

QuickRead: Obasanjo’s admonitions, Buratai’s assurances. Three other stories we tracked and why they matter